It was hardly a crack of dawn start but I’d been making use of The Altius’ wifi until the early morning and wasn’t ready for a five o’clock alarm. I started off riding, the first time with a full load, at around 8:30 am. It all seemed pretty familiar, riding through an Indian city in the morning rush as everyone was heading off to work. I had a rough idea how to get out of the city but my sense of scale and direction were wrong; it took much longer to reach the turn I was looking for and then the turn was to the right, not to the left as I had expected. But a couple of Indian gentlemen pointed me in the correct direction and, before too long, I was on the twinned highway that leads to Shimla. So were a lot of other people.

It was uphill and hot but not too steep. I hadn’t had any time to ride much before my departure from Canada so I was pretty much off the couch as far as fitness was concerned. I plugged away, climbing up in the increasing temperature. My cycle computer’s temperature readout (which had been accurate at home in Calgary) told a horrific tale: 46.0 degrees! Mind you, that wasn’t far off the recent reported temperatures and a good motivator for an early start. I had actually planned, wherever possible, to ride from 5:00 am until 9:00 am and then to hide from the heat, until I’d gained enough altitude for the temperatures to be more reasonable.

I pulled off for a drink at a little stall and inhaled a litre of water. I took another for the road; I began to suspect that the three and a half litres that I’d set off with would not last very long in these conditions. The unfamiliar exertion and the heat began to take its toll and I camped out for a while where there was some shade. There was a little less traffic now, now that Chandigarh had been left behind. I ran out of twinned highway, and the nice hard shoulder that kept me out of the way of the vehicles straining past me; they, too, were feeling the effects of the gradient. I had to take more care but, in general, the traffic was courteous and considerate. There was a constant blare of horns but maybe they were telling me that they had seen me rather than seriously expecting me to get out of the way; there was nowhere for me to go. I started keeping my eyes open for somewhere to spend the night. The first place I saw, the Timber Trail Resort, was very fancy. And very expensive (about $100/night). I pressed on, stopping for a late lunch at another roadside stall. Suddenly it clouded over and there was a terrific downpour. The stall had a little eating area under a tin roof held up with flimsy wooden posts and string – typical – and the gusting wind seemed about to take the whole place away. I did manage to keep dry, dodging the trickles that came through the roof at various places, while I ate my lunch and then waited for the rain to ease up. This was certainly not a high class establishment and the only English spoken was rudimentary, but I did manage to get across that I was looking for a hotel. A man bade to follow him and, after a couple of hundred yards, led me to The Nest. The Nest is an underwhelming place and overpriced at Rs 1200 ($21) but it had a shower, a rudimentary restaurant for dinner, and somewhere to lie down.

In the morning, I noticed a few more promising hotels within the next five to ten kilometres. But I had had enough for one day, and didn’t know where the next hotels were anyway. Climbing, climbing. Starting to see some of the surrounding hills and to appreciate the scenery. 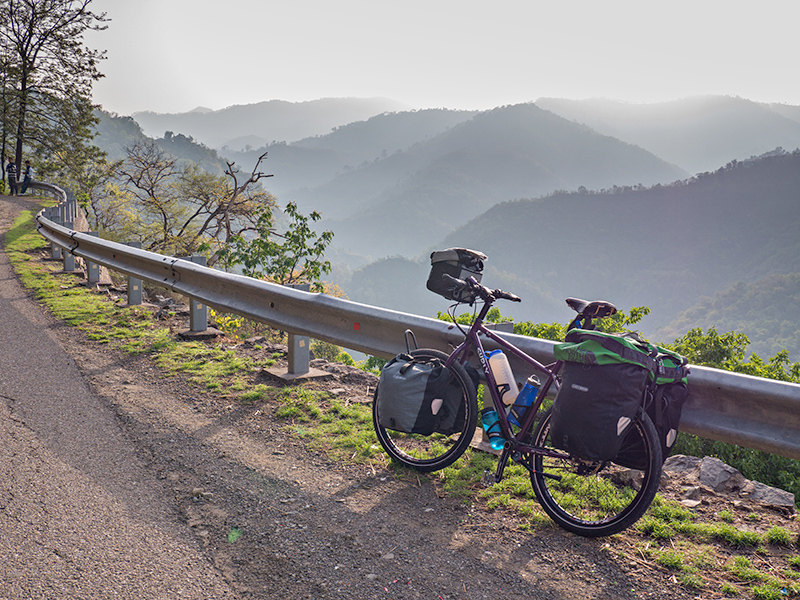 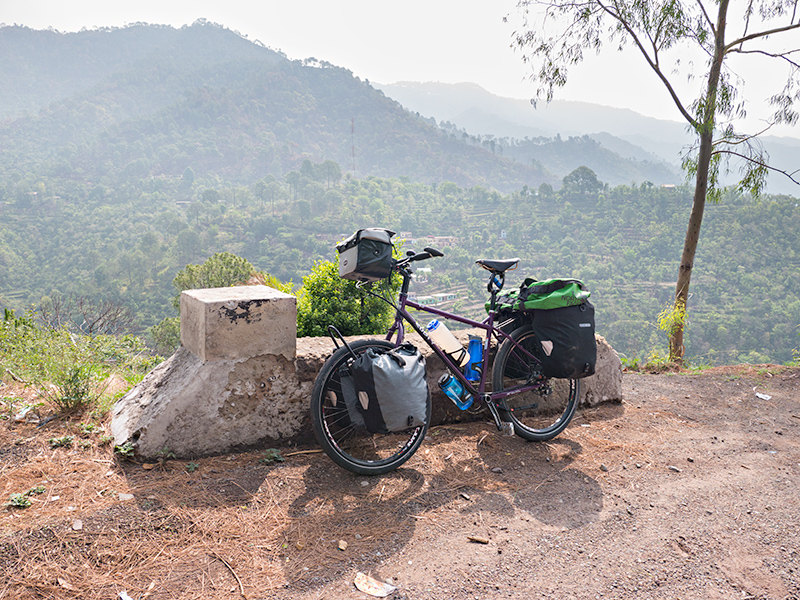 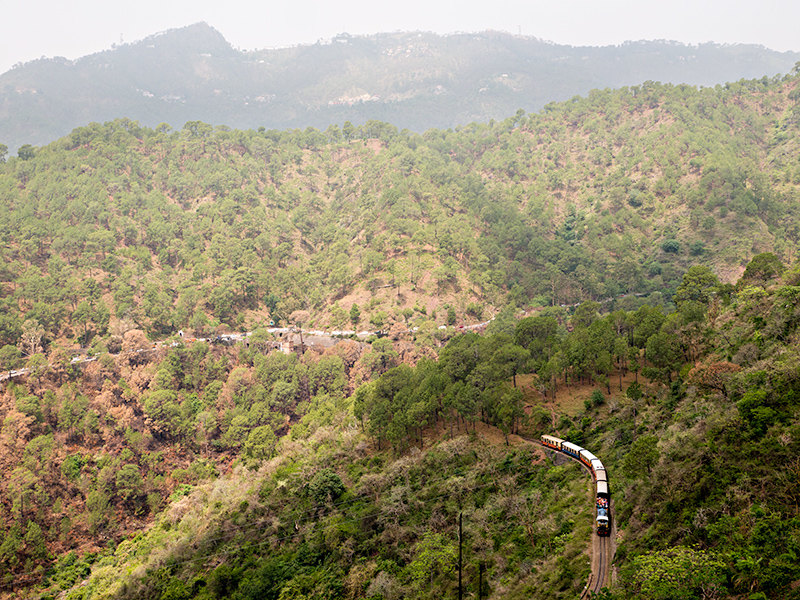 Much of the road was close to the narrow gauge railway line up to Shimla. The ‘toy’ train is the sensible way to get to the hills! 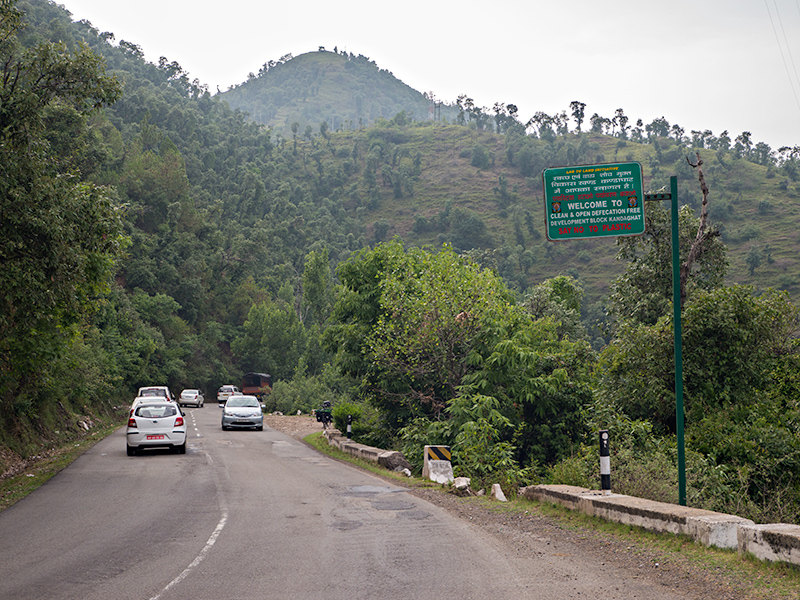 Traffic wasn’t too bad; it seemed to come in waves. And then I arrived in Kandaghat. I cycled right through it looking for hotel signs. A man at a petrol station sent me back to look for the Sharma Dhabba. Very authentic, old India, reminiscent of some of the places that I stayed in in the 70s, but adequate. It had a fan and was reasonable, I suppose, at Rs 770. From my room, I could see (and hear) the train. 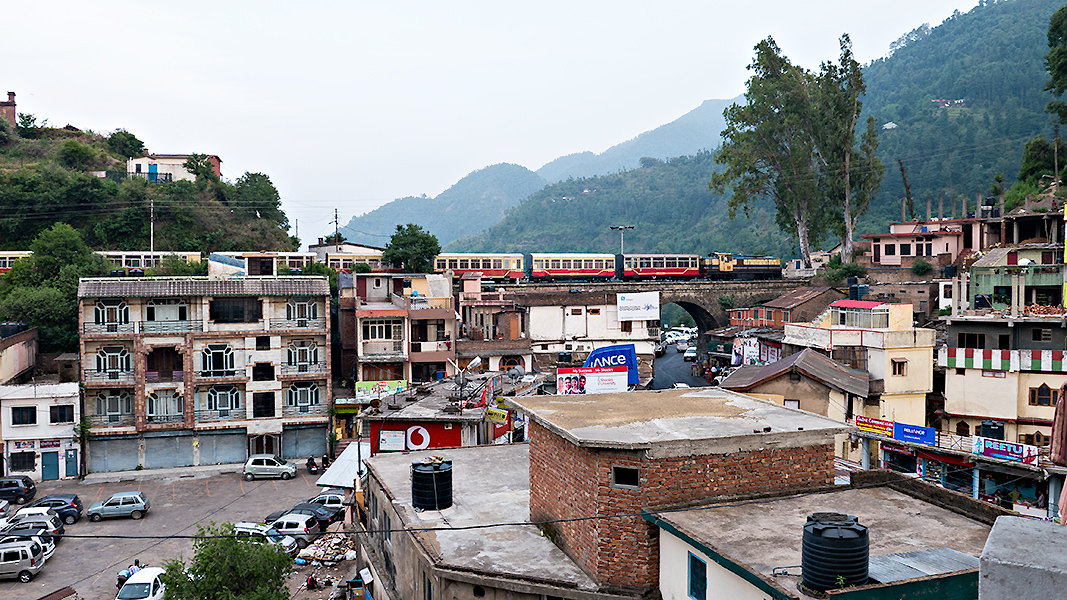 A tough day. Too tough. It was pleasant and a morning cool downhill to Sadhupul. Downhill wasn’t in my best interests, though, as I had to climb all the way back up, and more, to get to Chail. 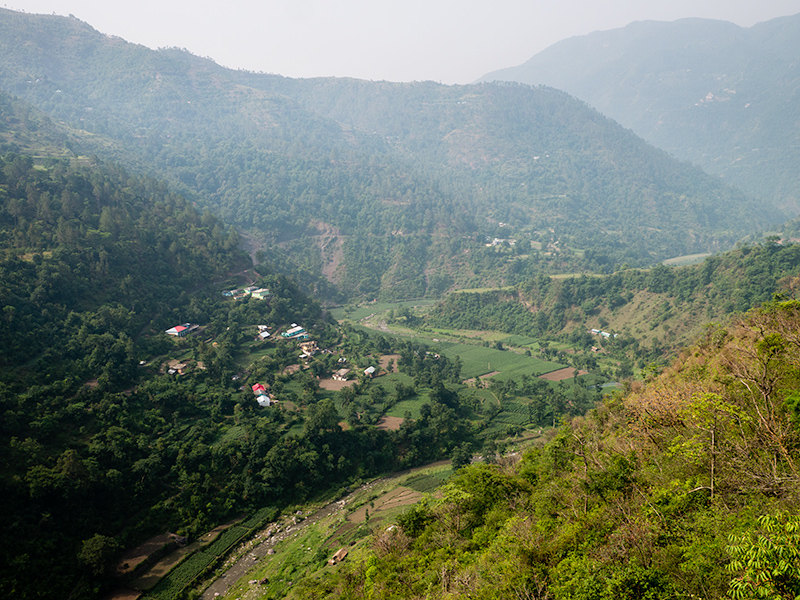 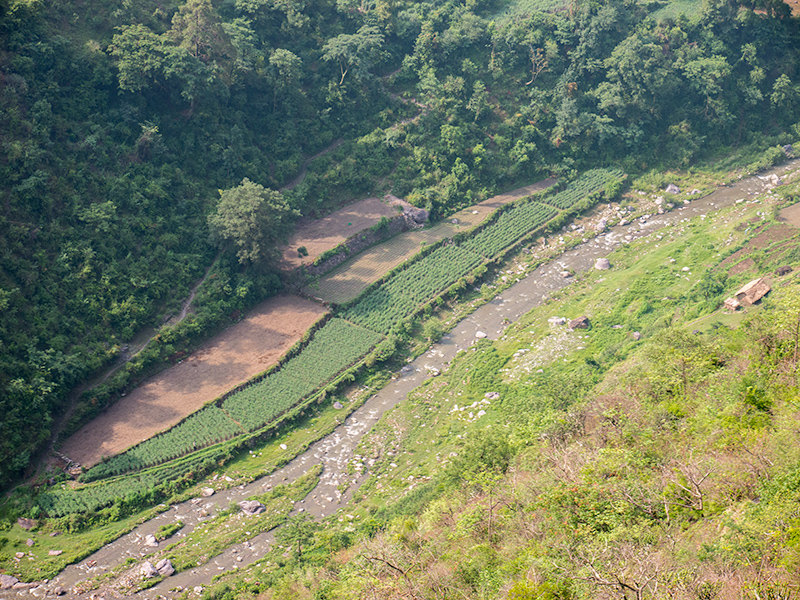 The road dropped quite steeply to the valley bottom at Sadhupul and the road crossed the river at about 1100m (if my memory serves) and immediately began to climb. 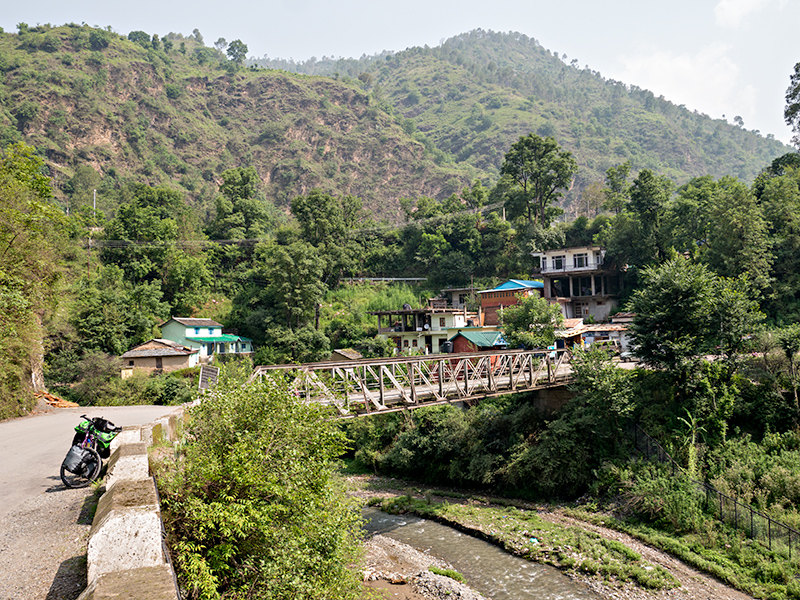 I passed a ‘salon’ on the way out of the village and stopped in for a shave and a haircut. Very good value at Rs 80. I should also have got some food, or at least some calories to carry, but I wasn’t thinking that clearly. 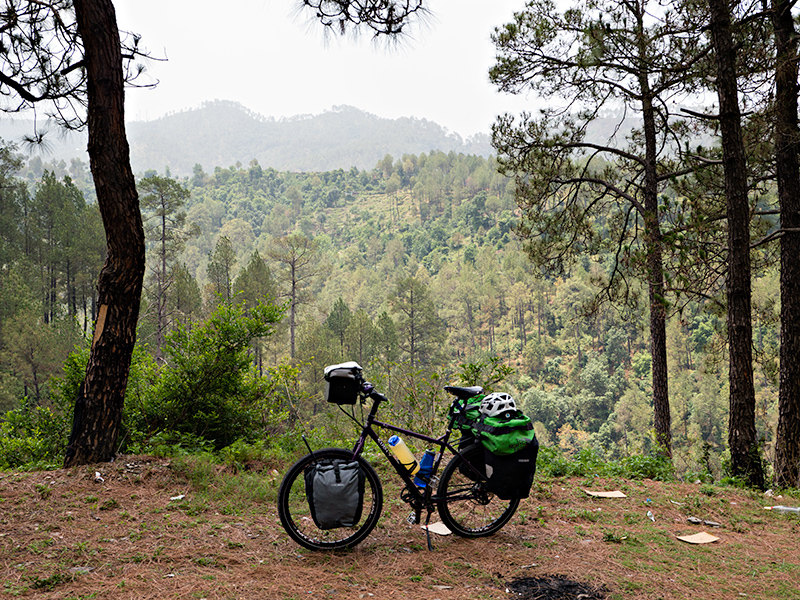 Then began the long ordeal. Maybe it was the heat, maybe the gradient. Probably both, plus lack of fitness and the heavy load. Soon, I was reduced to alternating spells of riding with rests every kilometre or so. The riding part became harder and I found it easier to push. Hours of it, making slow and painful progress. The scenery was nice, if I’d only been able to enjoy it. I recognised my folly in not stocking up on food as my pace decreased. There wasn’t any habitation, so nowhere to eat or buy snacks. It was going to be a long, long day. I already felt like it was. Then, mirage like, a little village and a dhaba. Food! Drink! 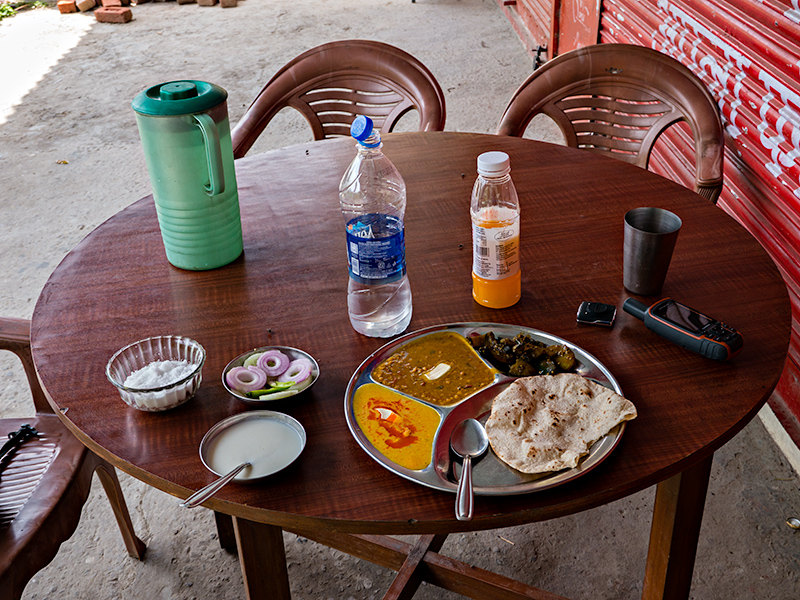 The road didn’t get any less steep but I felt better for having eaten. I was now pushing and resting, counting the kilometres to Chail, and wondering whether I would make it before dark. 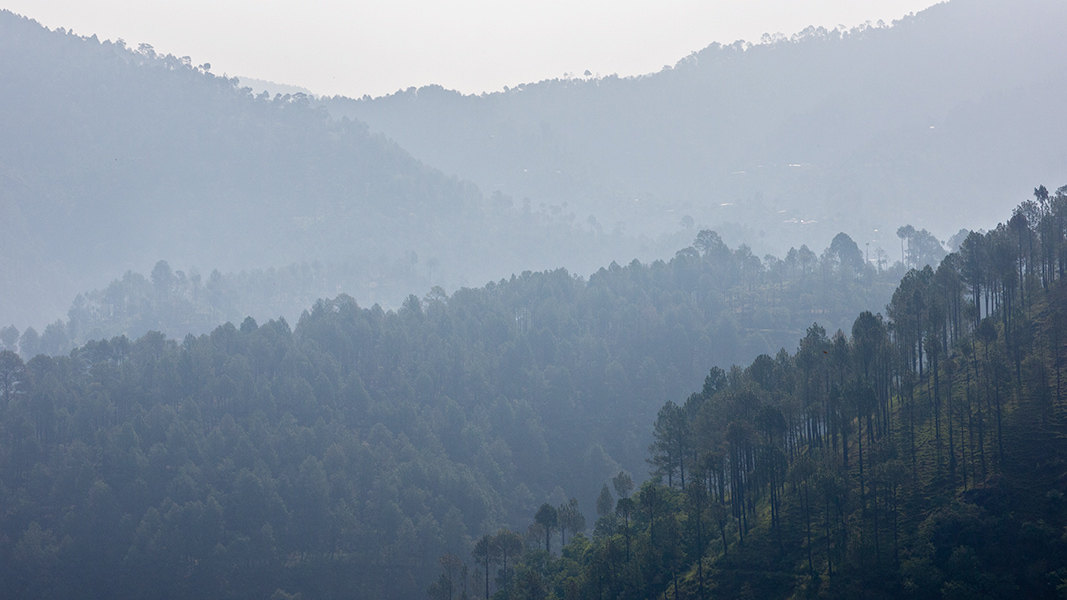 A miracle: the Grand Sunset Hotel is not actually in Chail but 3km this side of it. I felt immensely relieved to see it come into view. Time for a lie down!

I had reservations for two nights, and the day in between was spent in recuperation. I arranged to stay a couple more days, not ready yet for another day of serious uphill. The hotel was OK, one of the new type catering to middle-class Indians. And overpriced as a result. But I enquired at other places and all the prices seemed similar. On my second day, I rode up the three kilometres to Chail (no panniers!) and managed to withdraw Rs 10,000 (about C$ 186) from the ATM at the State Bank of Patiala. I had realised (belatedly, after leaving Chandigarh) that I should stock up on cash before heading into the back of beyond. I wasn’t allowed a second withdrawal, and my other card had its transaction similarly cancelled. Back at the hotel, I was able to get online (using my phone as a hotspot – very slow) and saw that one of my credit cards was at its limit (the bike, the flight, the hotel in Chandigarh, etc.). Time to phone the bank in Canada and let them know I’m in India, I suppose. 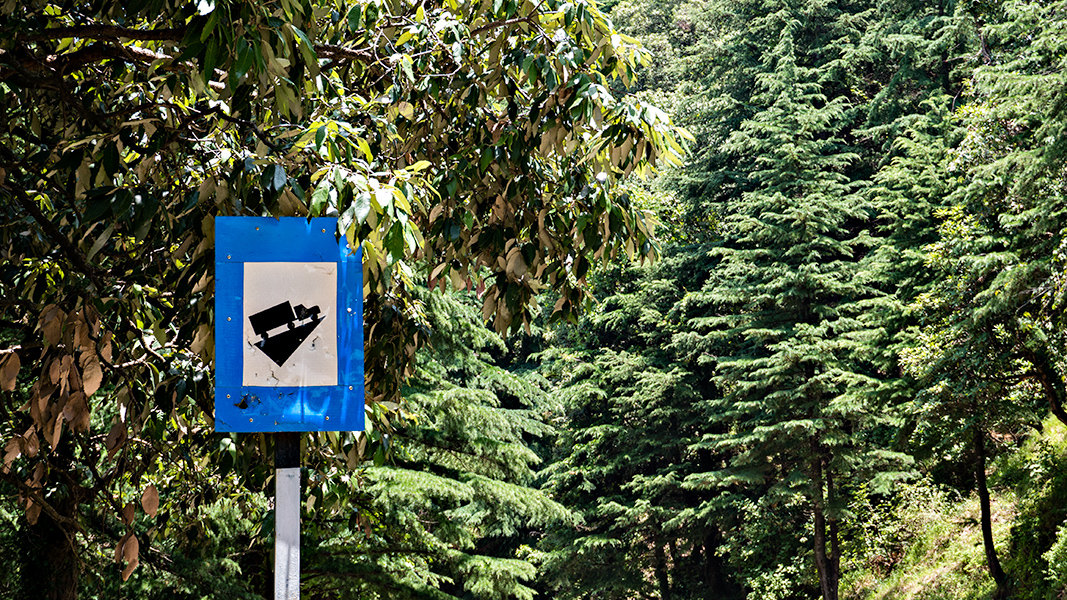 On the ride up to Chail, I noticed a sign for a cricket ground, the “World’s Heighest.” So I rode up there the following afternoon. It was fenced off, no game in progress, no beer tent. 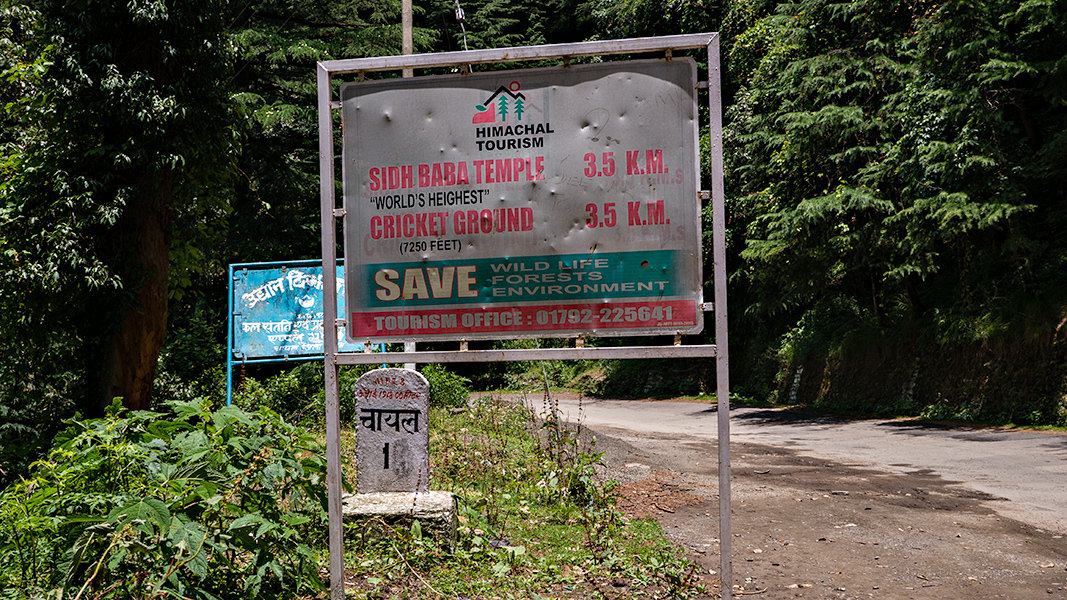 A steady trickle of Indian tourists came up to view the ground, and I became a secondary attraction for some: 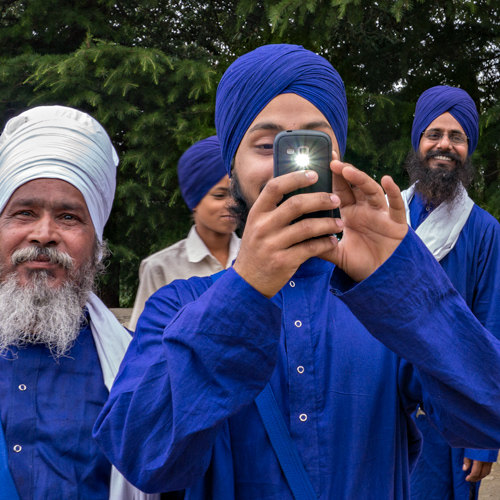 One of the visitors climbed through the barbed wire restricting access to the pitch and suddenly everyone (except me) followed suit. It was strange to see well-dressed Indian women edging along a wall top to a hole in the fencing. All it took was one to break the rules… 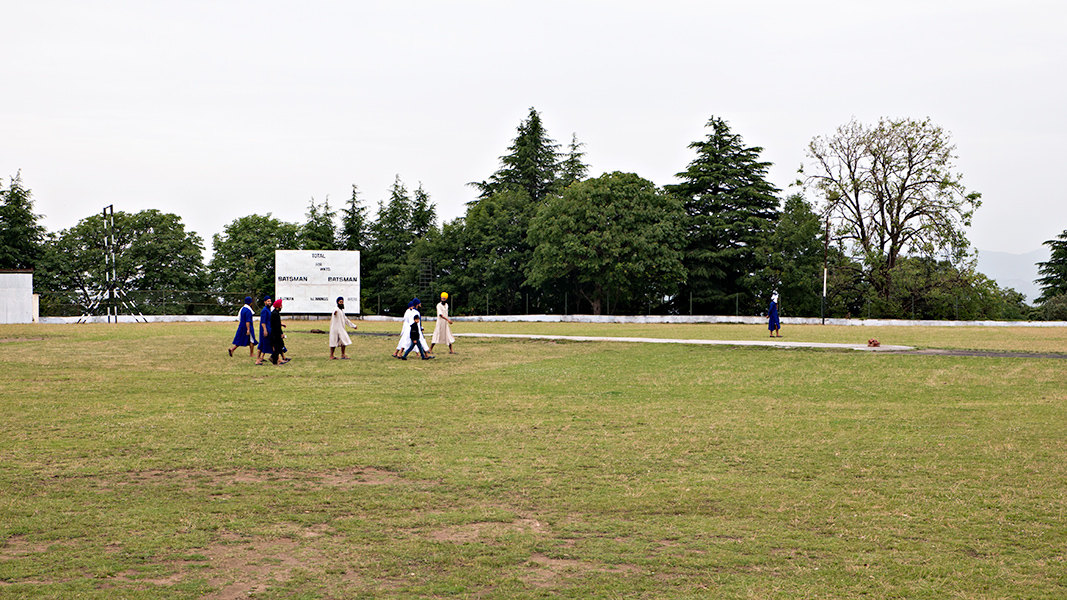 Money issues resolved, it was time to bid adieu to the Grand Sunset and head on upwards… 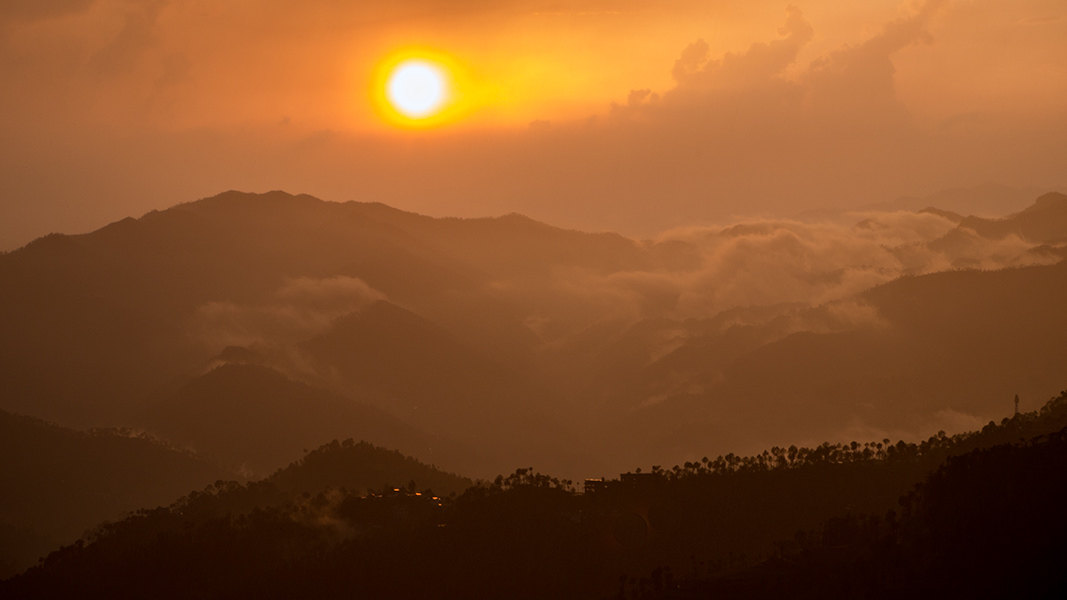