I hadn’t really decided what to do with my bike for the week in London; It wouldn’t be easy to get it across the city using public transport so leaving it in left luggage was a viable option. Another was riding it to Greenwich, an idea that I had previously discarded as not too smart after an overnight flight but seemed less foolish now (no doubt as a result of sleep deprivation).

It took me a while to get everything ready to ride, repacking rear panniers (I didn’t have the front ones yet) and strapping my carry-on bag across the top of the panniers. Apart from my handlebar bag, all my not inconsiderable load was balanced on and behind the rear wheels.

A helpful man in a bookstore at the airports mentioned something about turning left outside the airport, then right, go through one (or was that two) roundabouts until I could follow signs for the A4 to Central London. Taking care to avoid getting onto the M4 by mistake!

Powered somewhat by adrenalin, it was fun to be out riding. On the left, too; good practice for India (although that law is somewhat optional in India where it is all too common to see traffic approaching you the wrong way). I took a few wrong turns, crossed the Thames on Hammersmith bridge and followed a sign for the South Circular. This would take me further south than I really wanted but it was generally in the right direction. There was a bit of drizzle but nothing serious. The traffic seemed generally courteous of cyclists and it was all a pretty positive experience, with the extra excitement of racing against darkness. All ended well and I arrived in Greenwich: tired, sweaty, happy.

I spent the next few days with rides back into London, picking up odd items for my trip and getting used to (and really enjoying) the bike. I crossed Tower Bridge a few times, waiting once for it to be raised to allow a ship with a high mast passage.

I spent many happy hours (and more than a few beers) with my mother and two brothers, Chris and Nick. On my last evening, Chris and I went to a pub in Deptford (his local once upon a time) for some live music (a musician Chris used to play with) and, after the music, stayed to watch a spirited though unsuccessful performance of England against Italy in their first game of the World Cup. The bar-tender kept calling me ‘matey,’ hopefully just a reference to the Seafarer’s Ale I was consuming.

On the walk over to the pub, I notices some nice murals by a centre for people with disabilities: 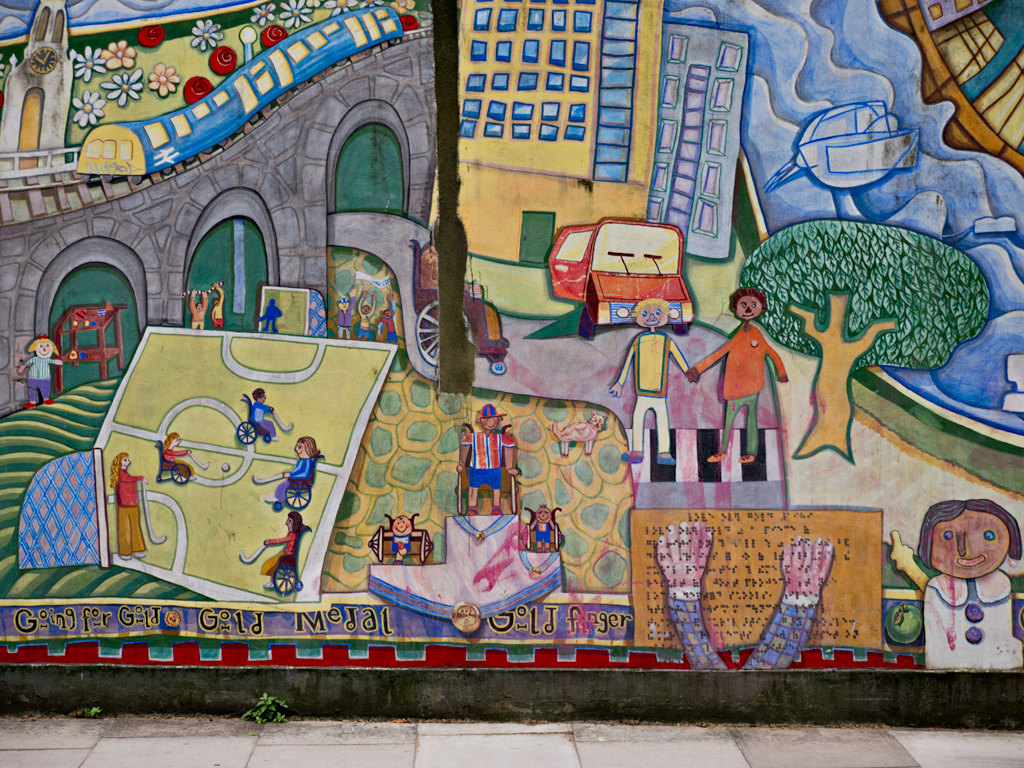 Across the road from these uplifting murals were blocks of council flats. Apparently, at some time in his less famous past, Mark Knopfler had lived in one of these. A Deptford boy who has, by anyone’s standards, done very well for himself.

Chris was free to drive me back to Heathrow on Sunday so I had time for a nice lunch at the Ashburnham Arms before I finished packing and left for the airport. Getting the bike aboard was a more complicated procedure than it had been in Canada and I ended up getting the bike shrink-wrapped. I’m not sure it was entirely necessary but it proved to be an entertaining exercise, finally wrapped manually by a helpful although a little overwhelmed assistant.

The bike was a bit larger than it had been on arrival; I’d forgotten to drop the handlebars and there were now bar-ends on the handlebars, too. The man at the oversized baggage counter didn’t know what to do when the package wouldn’t fit through his machine and sent me down to the other end of the departure hall where the first class oversized baggage was. The man there was a little more resourceful, “We’ll have to walk it down to the plane. Don’t worry, I’ll take care of it!”