An entertaining start to the day: I went to the German bakery for eggs, toast and coffee, and to pick up some bread rolls and yak cheese for lunch on the road. While at the counter to pick up my cheese, I heard noise and the shuffling of chairs behind me – a dog had run off with my rolls, pursued by a helpful Belgian lady. We caught the dog and I managed to retrieve two of the three rolls intact while the dog skulked off with his ill-gotten gain.

(There was another noteworthy ‘incident’ at the bakery, to do with ‘the usual suspects.’ It was an issue of Israeli-traveller behaviour, annoying because it seems somewhat typical. Everyone’s breakfast was interrupted by an Israeli arguing that he had been short-changed one hundred rupees upon paying for his breakfast. The counter staff explained the situation but the Israeli stormed off to get his friend, somehow also involved. The argument continued to escalate, quiet explanations from the employees, noisy complaints from the irate foreigners. For the first time this trip, I lost my cool. I got a one hundred rupee note from my wallet, went up to the Israelis and said “Here’s your hundred rupees. Now just phuck off! You’re a bloody disgrace.” I did restrain myself – strangely, since I was very angry – from asking whether they shouldn’t be at home bombing Palestinian schools and hospitals, rather than kicking up such a fuss over less than $2. But they wouldn’t have leave until they got money from the counter staff.

This is not atypical behaviour; Israeli travellers have a well-earned reputation for being cheap and/or troublesome stoners. The guest house I stayed at at the end of this day had turned away Israelis with the statement that they were fully occupied when this wasn’t the case; it is telling that a poor Spiti villager would turn away income like that.

A young Indian cyclist (from Kerala, doing a Ph.D in cosmology, who enthusiastically wanted to talk programming and physics) recounted another story from his day: a mechanical failure had him in a share-taxi. An Israeli was arguing that the fare should be split eleven ways rather than ten since a poor local woman with a baby should pay twice, once for each of them. Despite the fact that she had very little money, and the combined weight and space requirement for her and her child was less than the most vocal of the Israelis and she didn’t have a huge backpack.

Not a great day for Israeli-Canadian relations. But with Canadian PM Stephen Harper an unconditional supporter, what do I count?

The ‘usual suspects’ reference comes from cycling blogs in Peru, complaining about Israeli behaviour of a different, but not totally unrelated kind: foregoing established latrines to shit near water sources and dot the landscape with used toilet paper. Having found inexperienced trekking guides who would work for less than a living wage, they had not been ‘instructed’ not to shit on the trail, by the streams, etc.

Rant over. For now.)

I was on the road by 8:45 with a short climb out of Kaza, followed by a drop down to the bridge where the road crossed the Spiti River.

The valley was open and I could see the Ki Monastery high on the hillside. 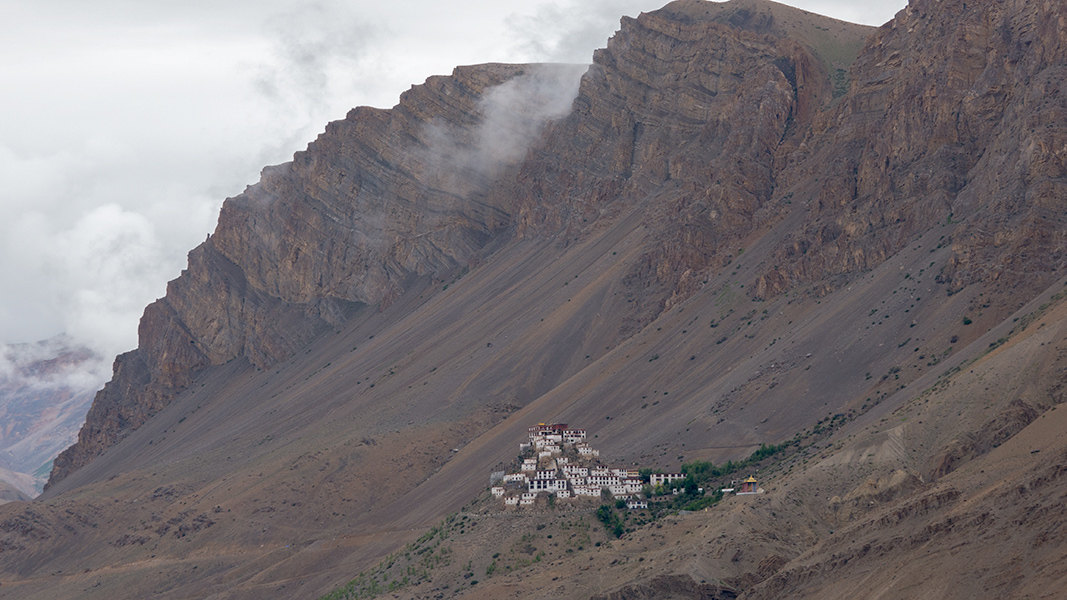 Clouds still hung to the mountains, a residue of the recent damp weather, adding to the moody atmosphere of the surroundings. The coolness was welcome as the road climbed steadily on a ‘once-tarmac-with little remaining-except-potholes’ surface. 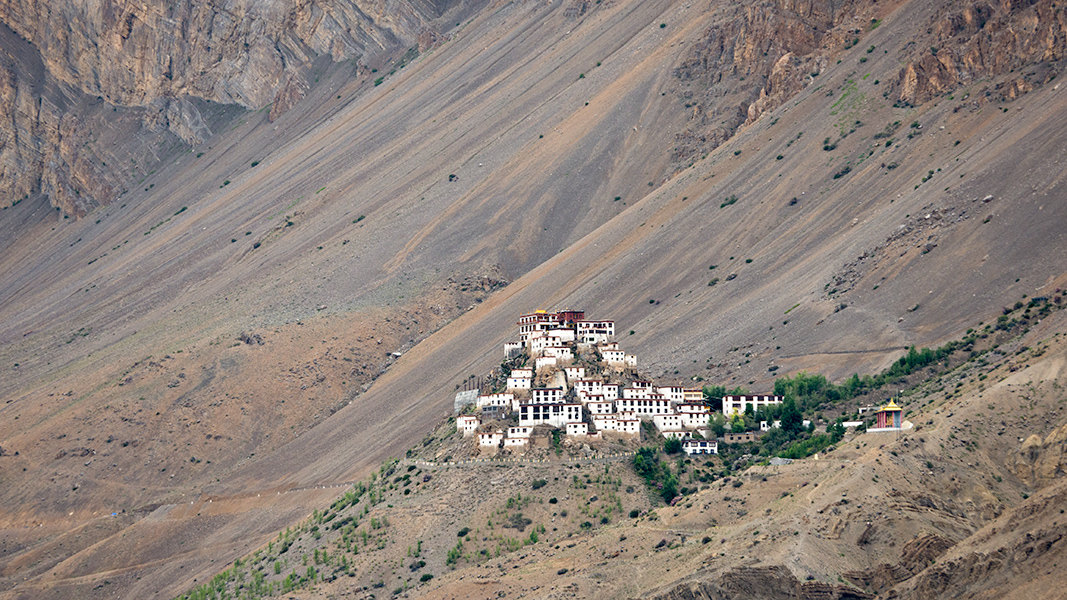 The riding was pleasant (bumps apart) through a few villages with traditional Tibetan homes. 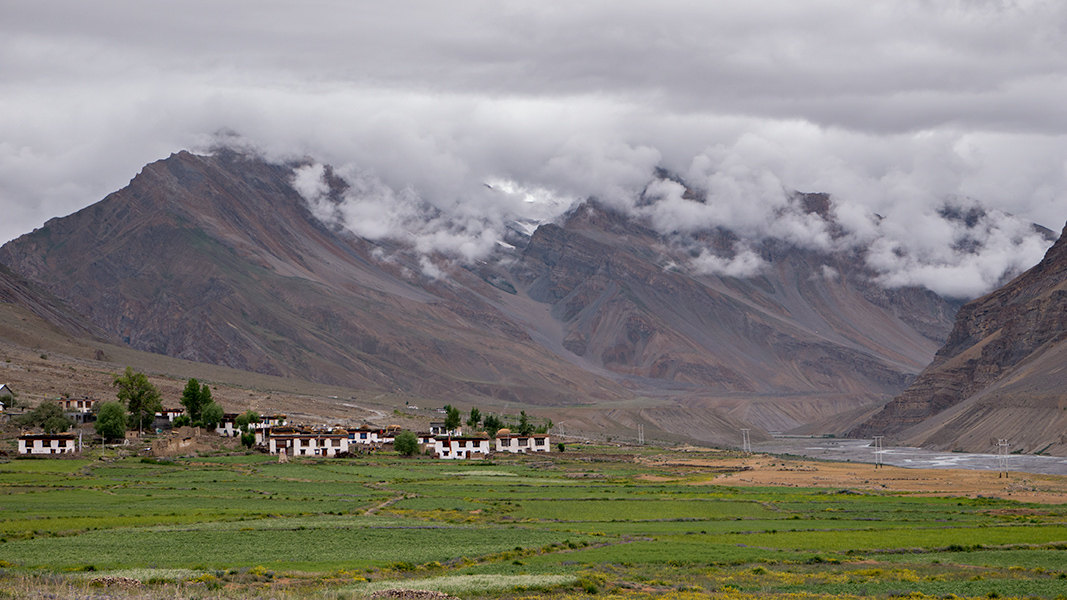 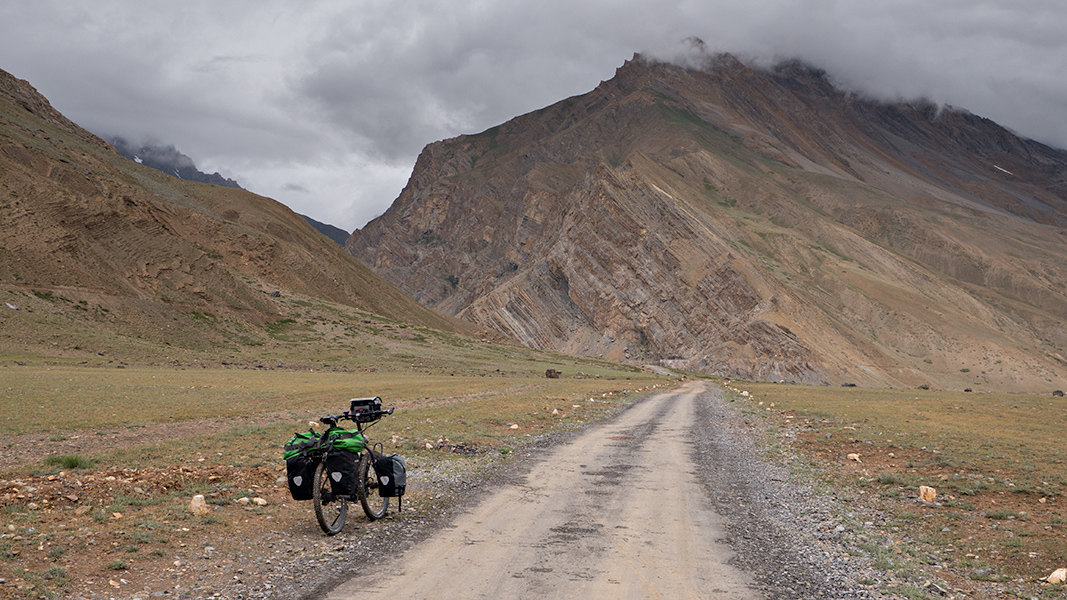 Then I had to relinquish my preciously gained altitude as the road dropped back down to cross a major tributary: 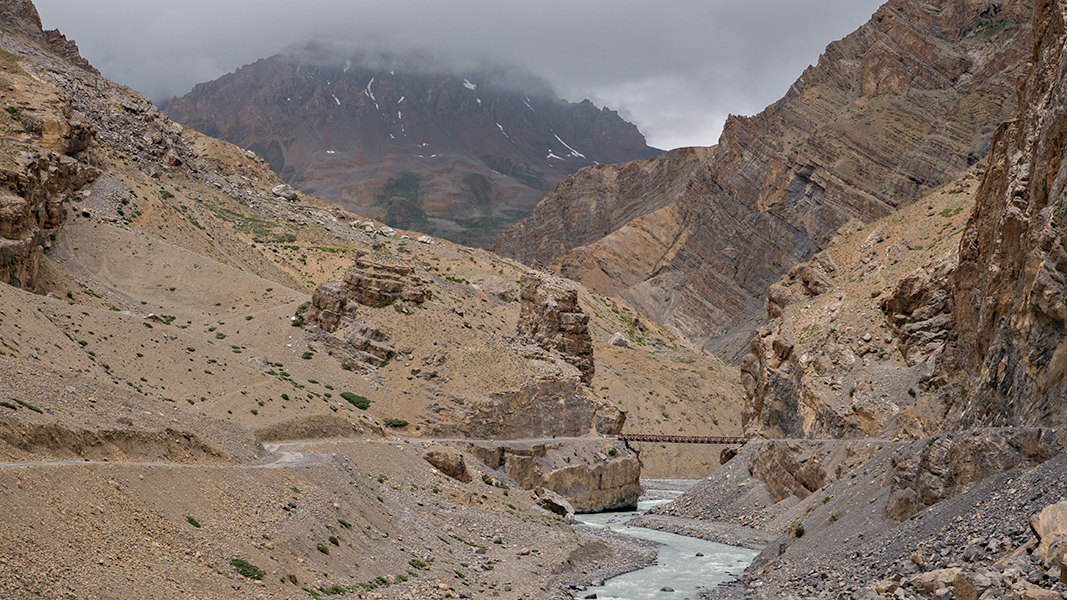 Reflecting on the day so far: 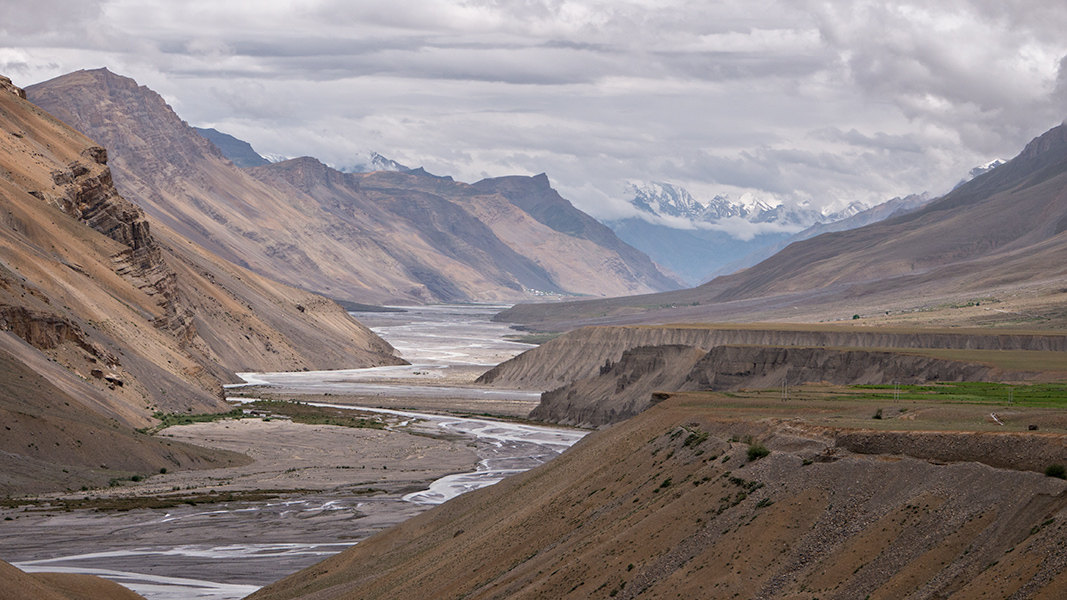 The splendour continued: widely spaced villages, huge scree slopes dominating the road, young monks-in-training (male and female), from a nearby monastery, who seemed contentedly occupied with washing their dolls in a stream until they saw me and requested a photo. And then, less successfully, requested chocolate: 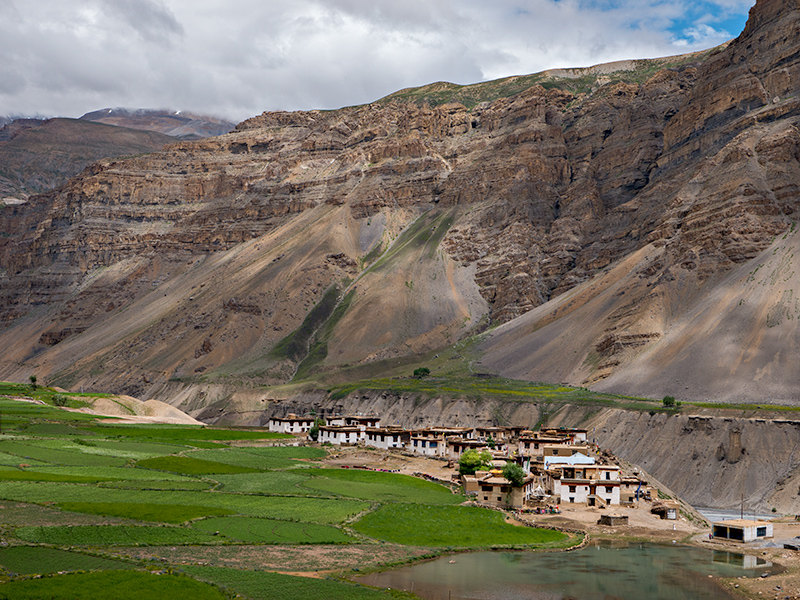 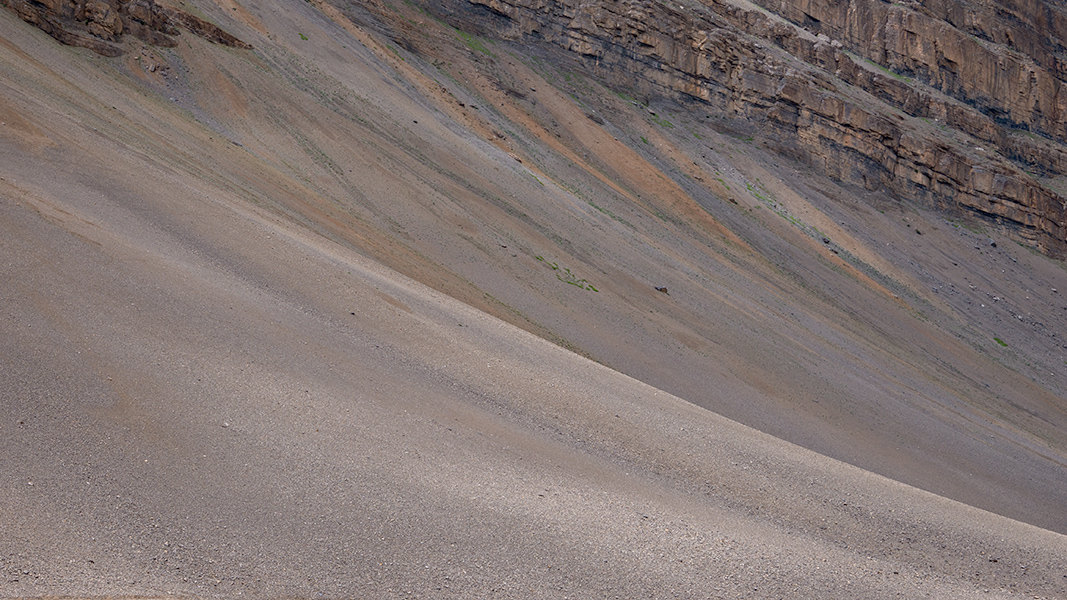 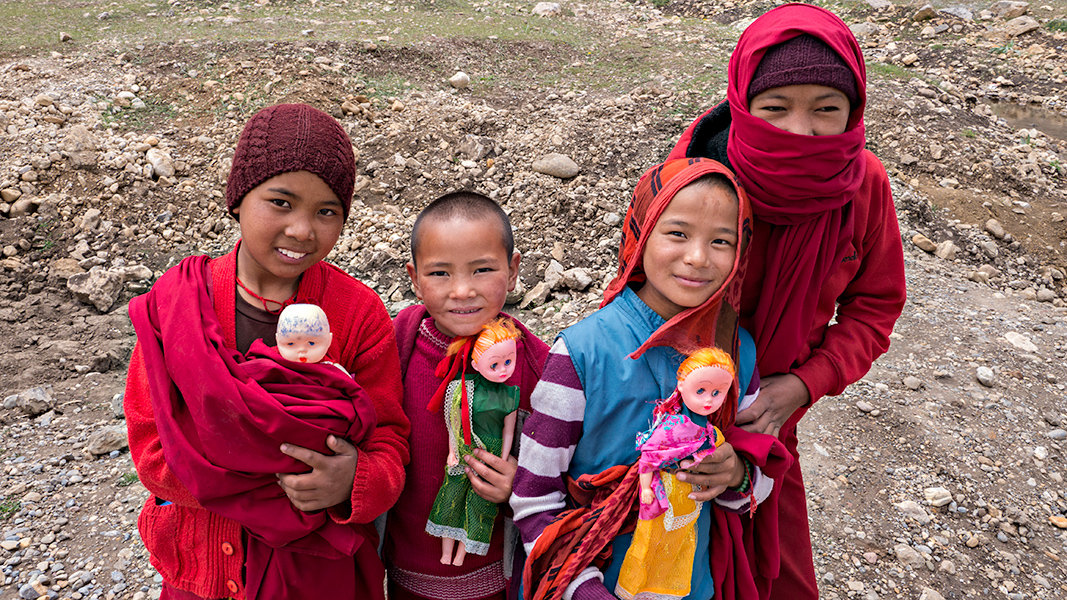 Occasionally the road contoured up a side valley to cross a tributary of the Spiti River. I stopped in one of these for a for a yak cheese sandwich lunch (of the two bread rolls I had retrieved from the dog earlier). It was so pleasant (both the location and the lunch!) that I immediately ate the second one. 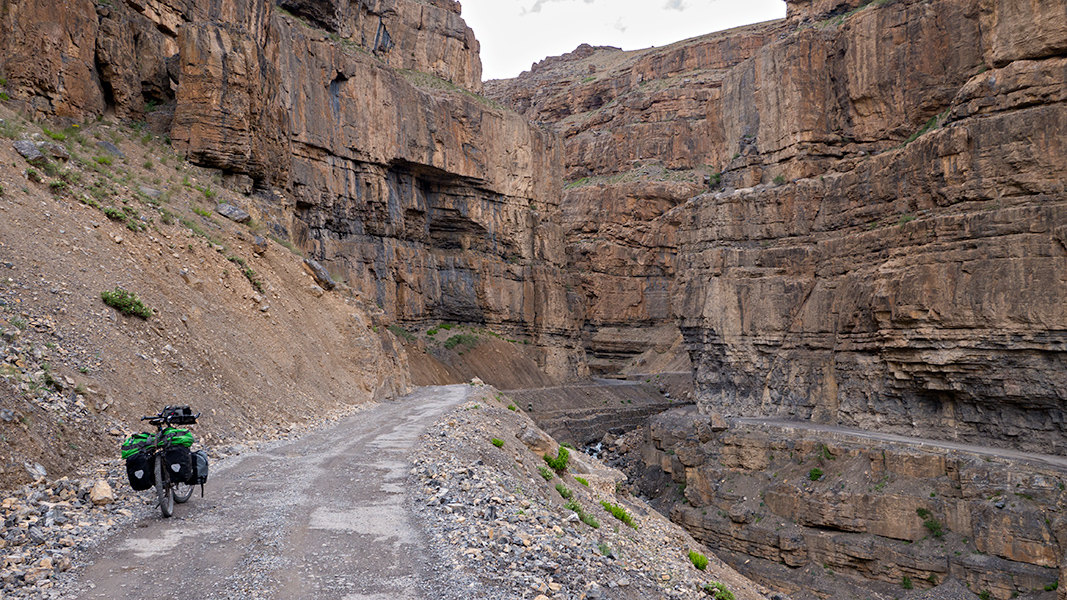 A Belgian couple (the lady had helped me with the dog at the bakery that morning) rode past on their Enfields and stopped to check that I was OK. I was fine. They carried on. I munched on. 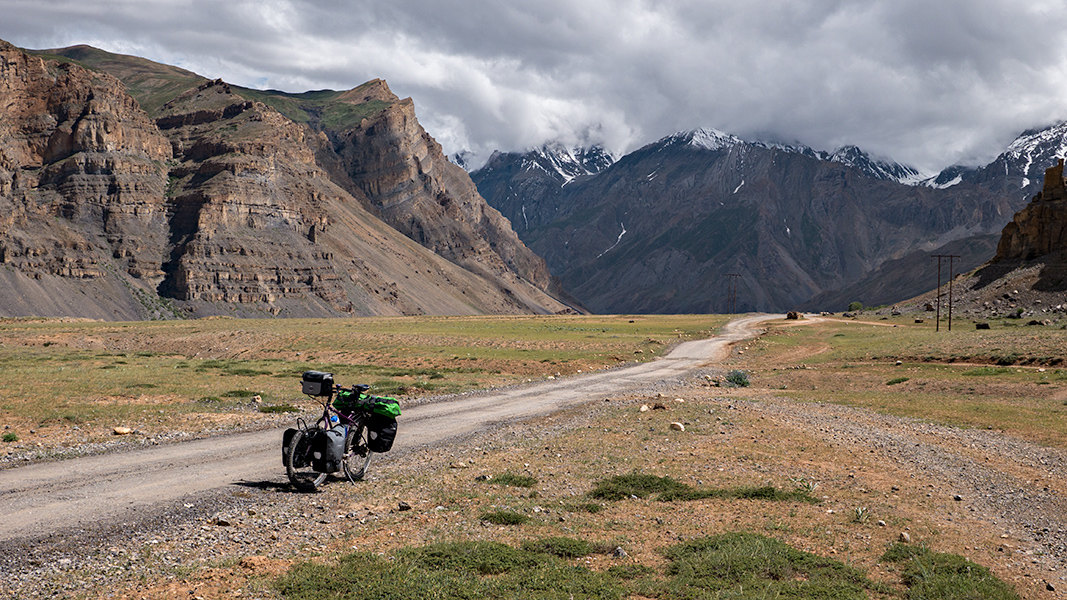 The weather seemed on the mend after the previous few days of cloud and showers, but it was still comfortably cool. What a beautiful part of the world! I rode through green meadows that would have made perfect camping spots. (But I’d eaten my food and Brian, a fellow Canadian I was sort of keeping pace with, had agreed to arrange a room for me in Lossar. He was a hard man to keep up with, riding more strongly than I, particularly on the uphills.) 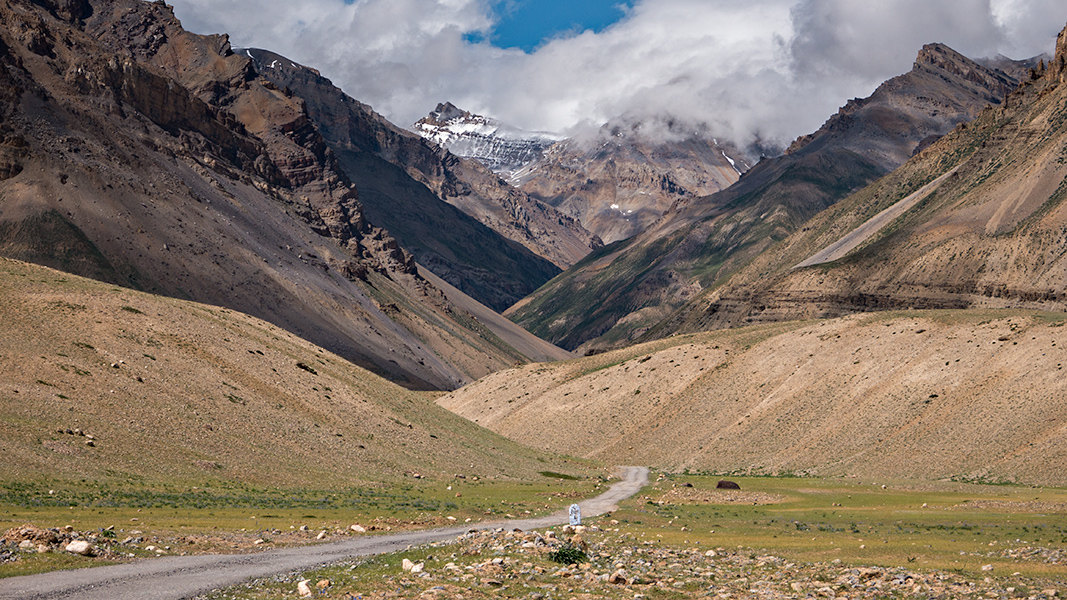 I stopped frequently, just to enjoy the surroundings (honest!). There was virtually no traffic and it was hypnotically peaceful. Then I started to stop to rest as my early day energy began to desert me. I wasn’t comfortable riding; there was blood in my urine and I was stopping to pee, painfully and frequently. Something is clearly not quite right. Maybe bruising from the rocky roads? 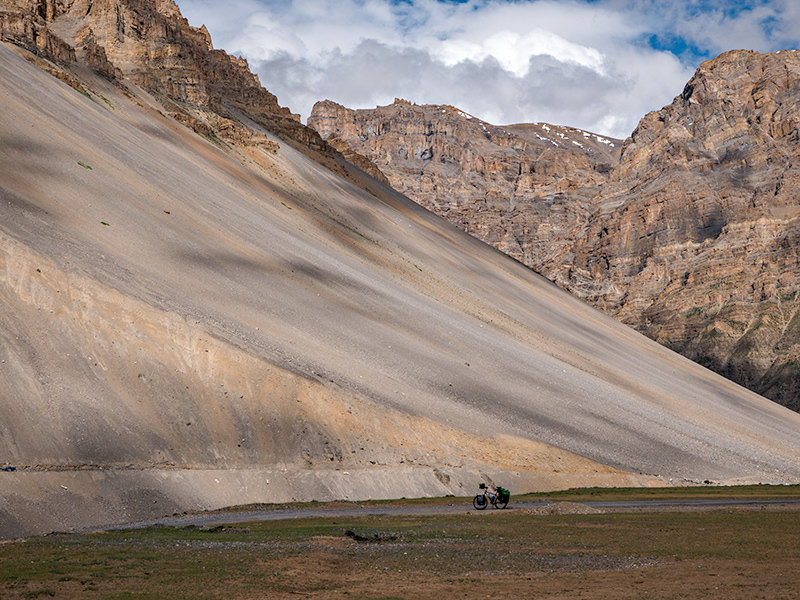 Dropping down to cross the Spiti again after about 40km, there was a steep uphill that had me gasping. It took three rests but I made it without pushing (though there were no witnesses to verify this…).

The rest of the day, although still spectacular, became a bit of a trial – I was definitely waiting for this day to be over.I arrived in Lossar eventually, at about 7:00 pm, several hours after Brian. 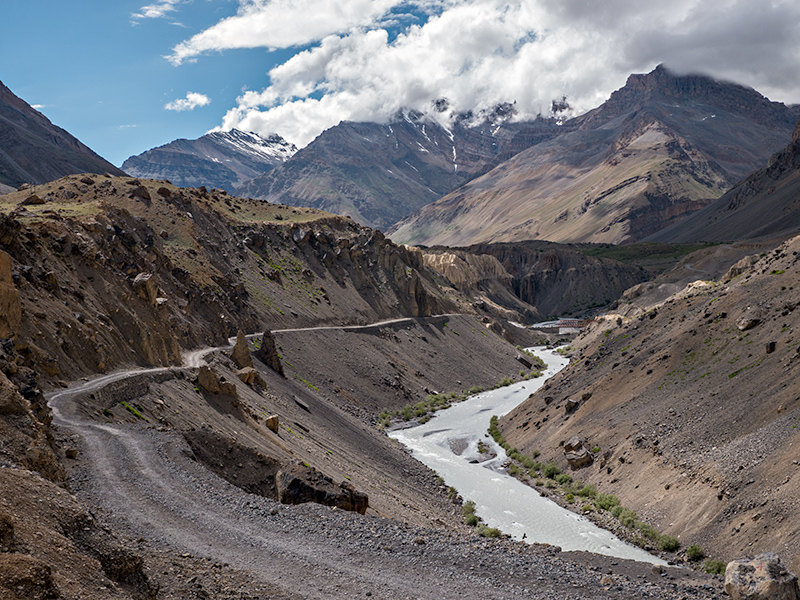 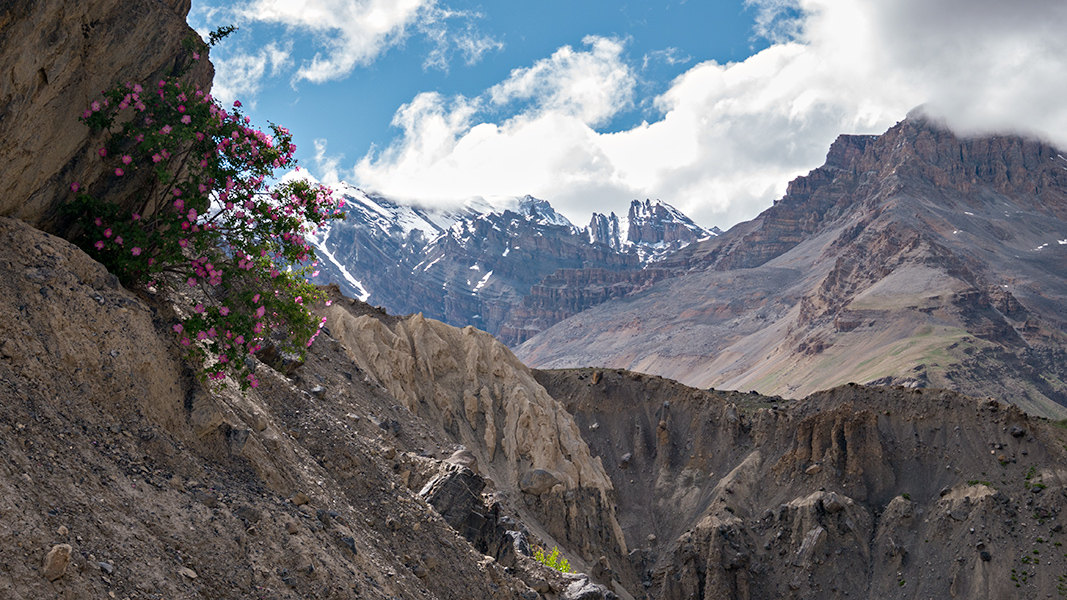 The guesthouse is simple but we (the Belgian couple on Royal Enfields, one of whom had helped me salvage my lunch, and four French in a taxi) all enjoyed a traditional Tibetan meal. I sampled some chang (home-brewed rice beer mixed with tsampa – flour – for the first time in 40 years. It doesn’t seem to have improved much. But it probably helped me have a good sleep!

Not exactly racing along! But the terrain does have something to do with it. Brian normally tours at 20-25 kph but is around 10 kph  here. And, no, that is not because he is waiting for me to catch up.

Brian and I decided on a day in Lossar to gather strength for the high pass over Kunzum La. To be fair, Brian was already plenty strong enough. A day wandering around Lossar was fine as far as I was concerned. 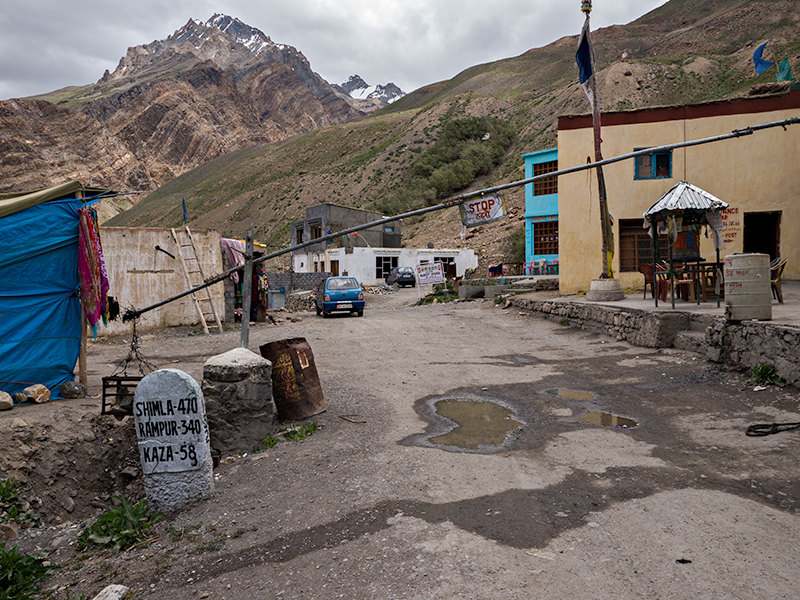 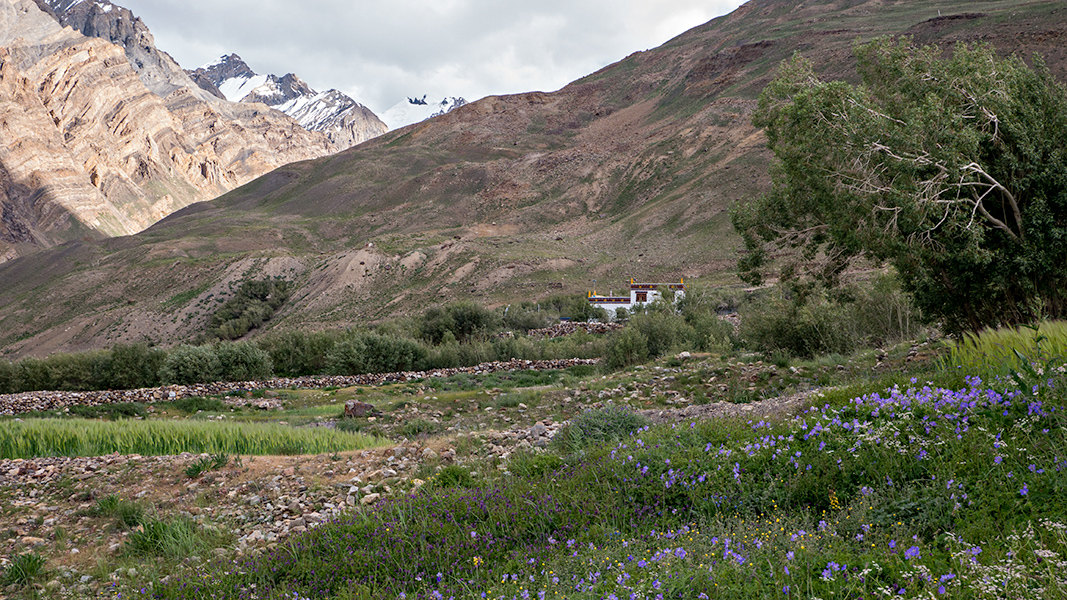