An eventful start to this day!

My night was undisturbed by wild animals. Or by passing vehicles, not after a couple of late night travellers drove down the hill at around 9:00 pm. Up at first light, packed up and breakfasted on a packet of creme biscuits and a chocolate bar, and on the road. I had stopped at the end of the tarmac the night before and the road was dirt and rocks. But very smooth and hardly a problem. What I took to be Sinthan Top was visible on the skyline, with ‘kazigs’ leading up to it, still a thousand or more metres above me. 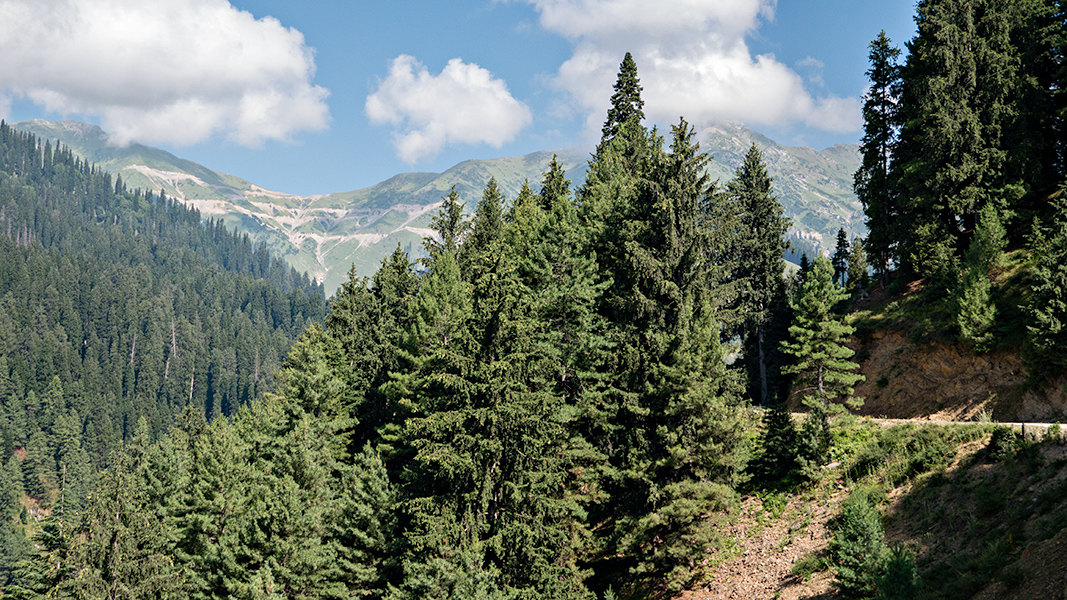 It was quiet and peaceful, as usual, but my pace was slow. I stopped for more calories, of the same doubtful quality as my ‘breakfast.’ My rear brake needed adjustment (or I needed a longer rest than a packet of creme biscuits justified) and, to get a closer look at it, I removed my panniers in order to  turn the bike upside down. A foolish mistake…

When I set down  one of my front panniers, it rolled on to its side. Then rolled over again. And over the edge of the road, under a fallen tree, and down a steep scree slope, increasing in speed, rolling along with little bounces until it disappeared into  a treed gully a couple of hundred metres down the slope. Damn!

I couldn’t see it. It could have kept going for hundreds of metres. I scrambled down to where I had last seen it; there were grassy bushes and scree leading into a steeper gully. I doubted that there was anything to stop my pannier’s continued downward progress. Then I heard a vehicle pass on the road a couple of hundred metres above me – where my bike and remaining belongings lay scattered, passport and money too. It seemed a good idea to head back up the scree and make sure nothing else disappeared.

I not quite sure what that pannier contained. My sleeping bag, bivvy bag, sleeping bag liner, gloves, socks, a shirt or two and a pair of pants, my main map, … and probably a few other items that I’ll miss later on. On the plus side, I had intended to leave my sleeping bag (old, bulky and not very warm) and a few of the items behind rather than pay for too much for excess baggage on the way home. Sure, it was a bit of an inconvenience, but I was mainly annoyed at myself for my careless stupidity.

It was time to rearrange my load. The two rear panniers moved to the front racks. The remaining front pannier was unloaded into the mostly empty green bag that had been riding on top of my rear rack. Without rear panniers for support, it now folded down limply on either side of the rack but would get me to the end of the trip. I hoped.

A few hours later, at around 11:00 am, I was back on the road, somewhat chastened.

The famed ‘hotel’ that I’d been told about the night before possibly materialised in the form of a small food stall by an army base. I stopped for a cup of tea and a couple of chapatis to dunk in it before going through a checkpoint. This one was fairly cursory, with the soldier in charge not quite knowing what to make of me, or what he needed in the form of documentation.

The road remained dirt, rock or gravel but definitely rideable. A herd of goats above me provided some interest in the form of rockfall onto the road but nothing too serious.

Sometimes the road seemed to be going so far away from what I’d assumed was Sinthan Top that I began to think (and perhaps hope) that my summit was elsewhere, hidden – and not so high. No such luck. The climb was steady but inexorable, but the views below me continued to improve as I gained altitude. 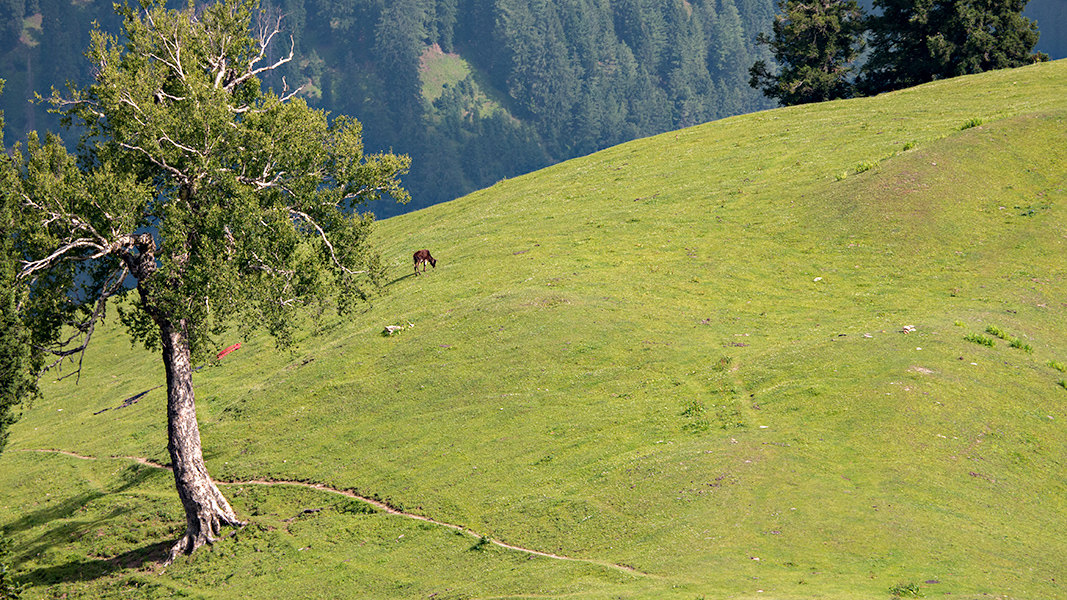 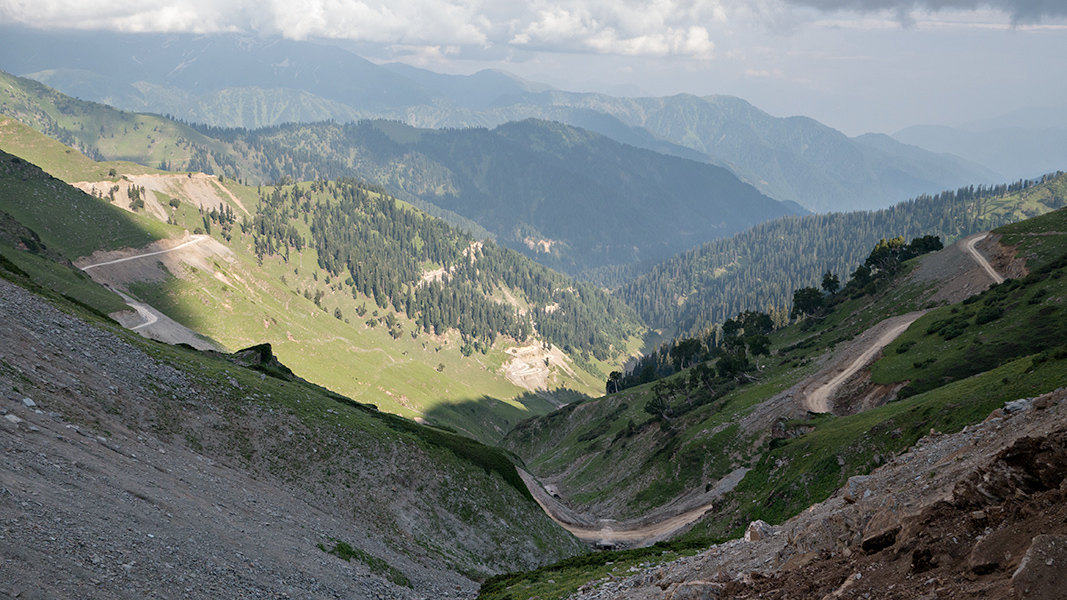 It was getting late in the afternoon when, tiring, I got to the top. I had alternated between riding and pushing for the last handful of kilometres, just to keep going rather than stopping altogether to rest when I needed a break. It had been a tough couple of days, with an altitude gain of around 2700 m. But it was also encouraging; I rode just about all of it.

I stopped for tea at the top, a nice delicate Kashmiri tea, but there was only an hour or so until it was dark and,  I was told, the nearest accommodation was in Kokernag, 48 km further on. At least it was downhill. 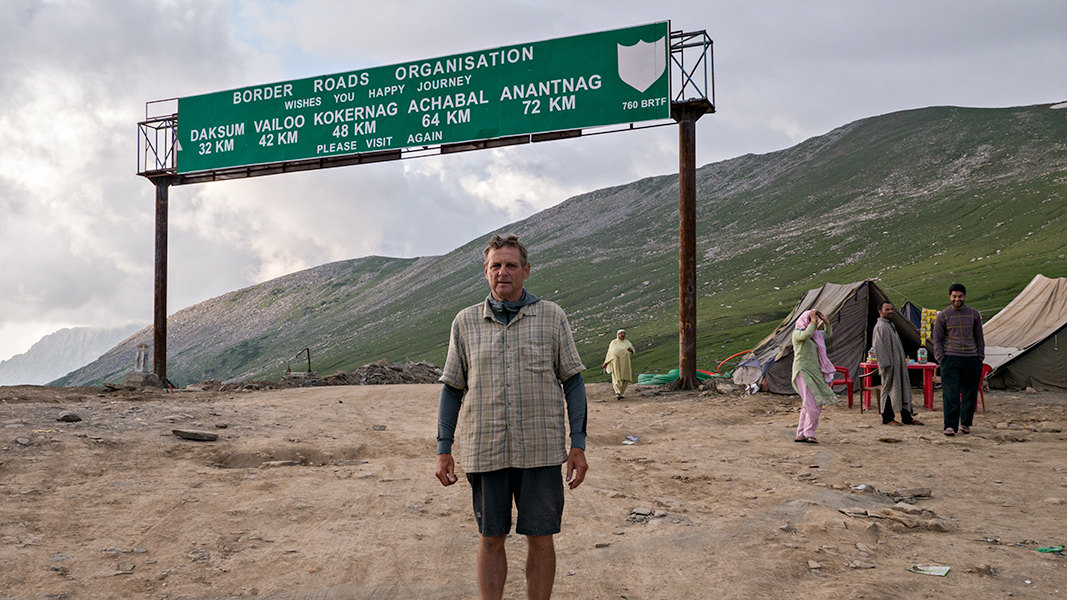 Not only downhill, but nice smooth tarmac. I had to stop to put on more clothing, coasting downhill quickly in the approaching gloom. 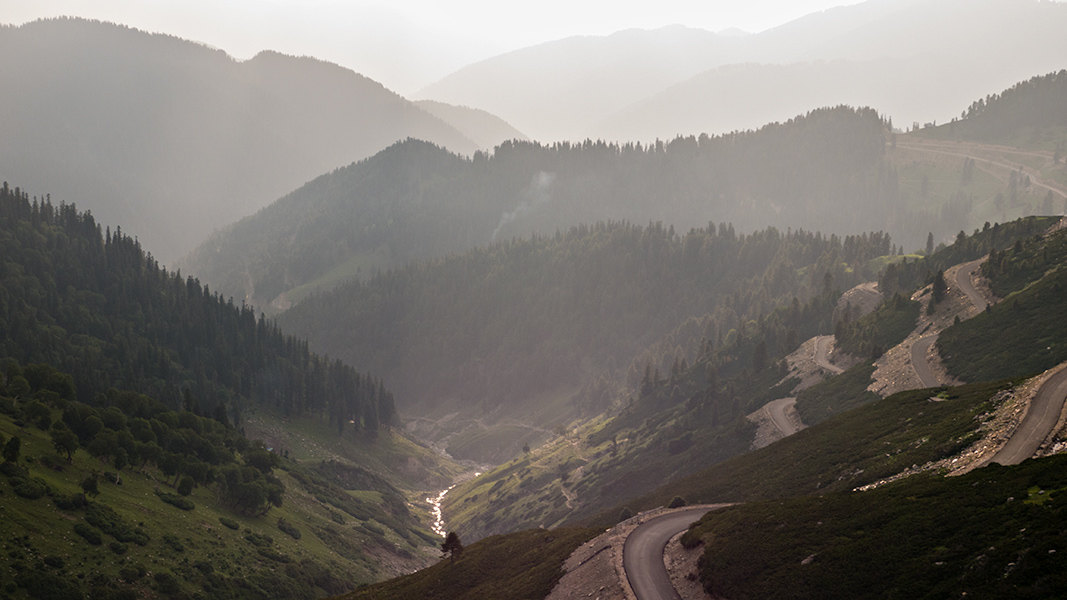 I did more than half my day’s distance in the last hour with hardly a pedal stroke. It was almost dark when I went I reached Daksum, and saw a sign for a tourist bungalow! They had two rooms – and were fully booked. But the caretaker offered me a storage room, for the relatively exorbitant rate of Rs. 500 ($9). But it was somewhere to sleep and eat.