I ate breakfast in Kalpa and coasted down to Reckong Peo. The internet cafe which had had no access the previous day was available for business now and I fired off an email home to let those that cared that I was still alive and well. More coasting down to the national highway, where I turned left towards Pooh. The view back down the Sutlej Valley: 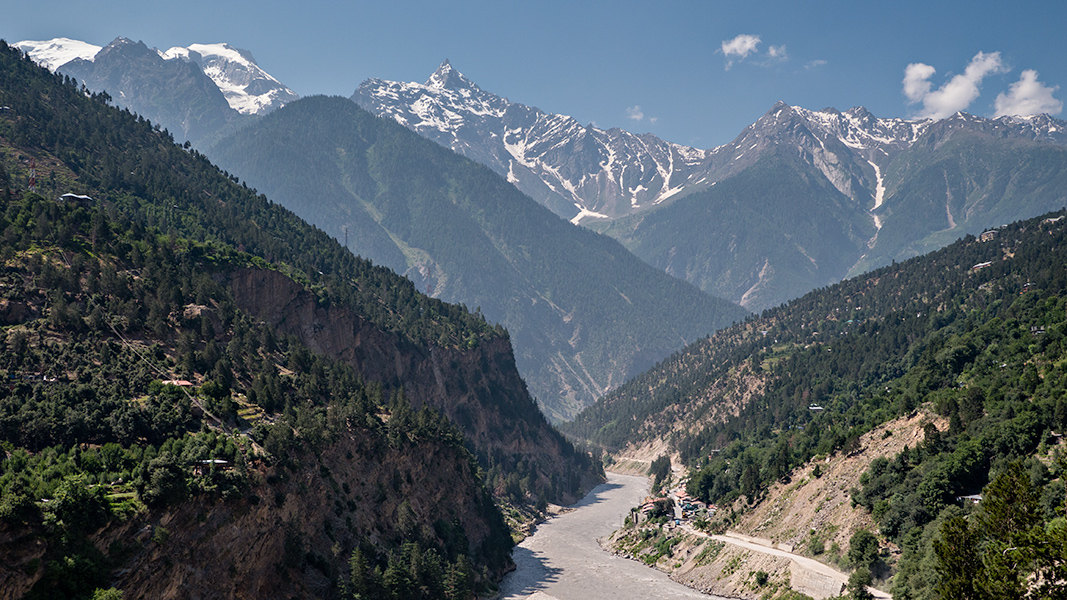 The valley was narrow in parts. Workmen were busy working on road widening or smoothing the surface, a never-ending task. 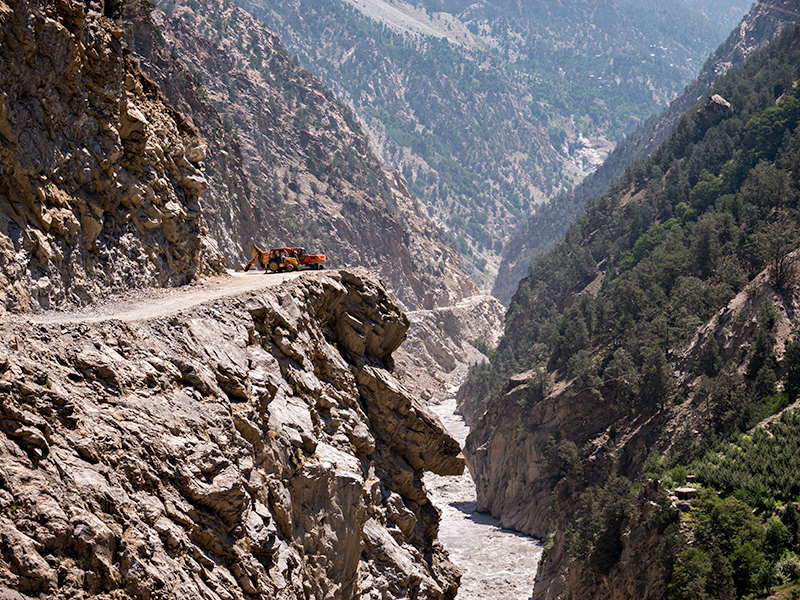 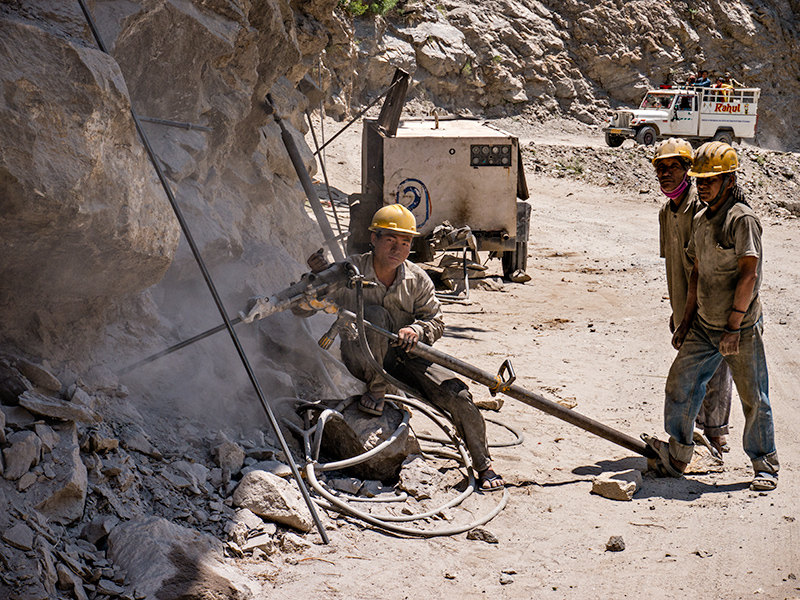 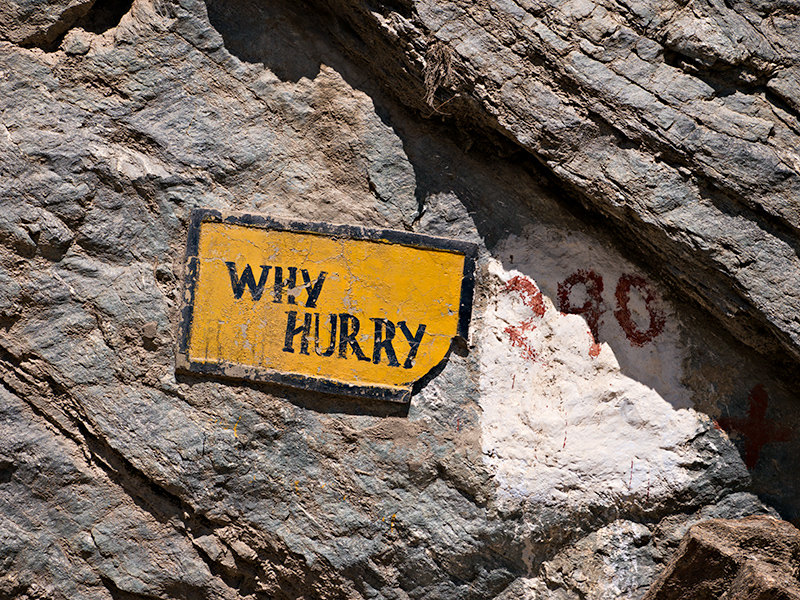 There was a gradual climb on the usual mix of multipli-patched tarmac and dust and rocks for about 25 km to Jangi. The road crossed the river a couple of times – once on a shaky suspension bridge with gaps between the wooden boards through which I could see the river below. Buses and trucks use it so it must be safe, right? 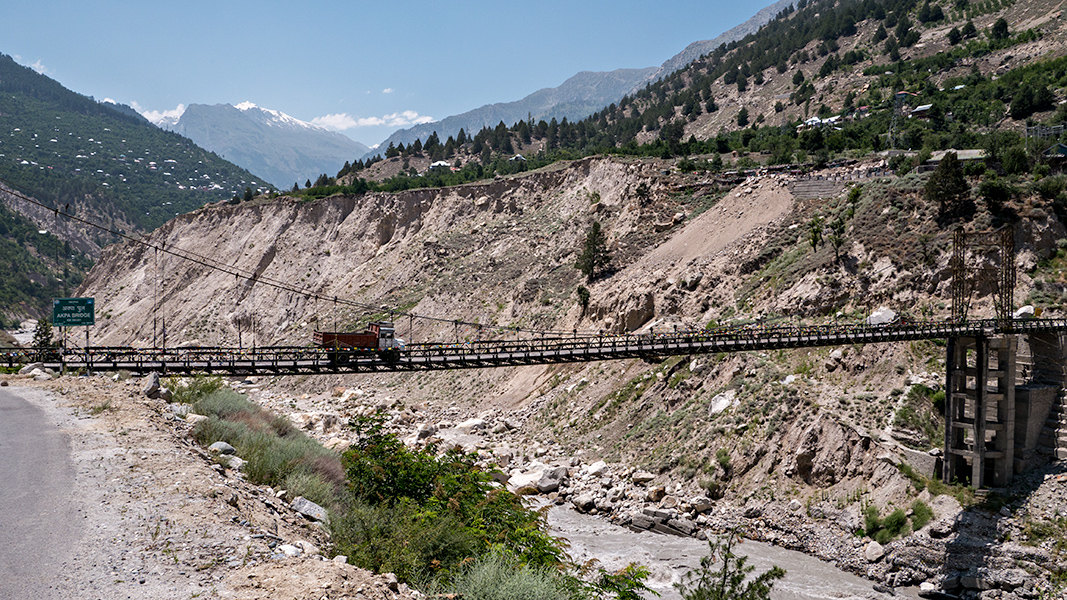 Jangi was simply a check point to stamp my Inner Line Permit, which was done in friendly fashion by four officers sitting in the shade of a large umbrella. I must be getting close to China – Tibet, really. Because of some disputed borders, there is a strong military presence in the area. The main road in Peo had been named ITBP Road, which I belatedly learned meant the Indo-Tibet Border Police Road. 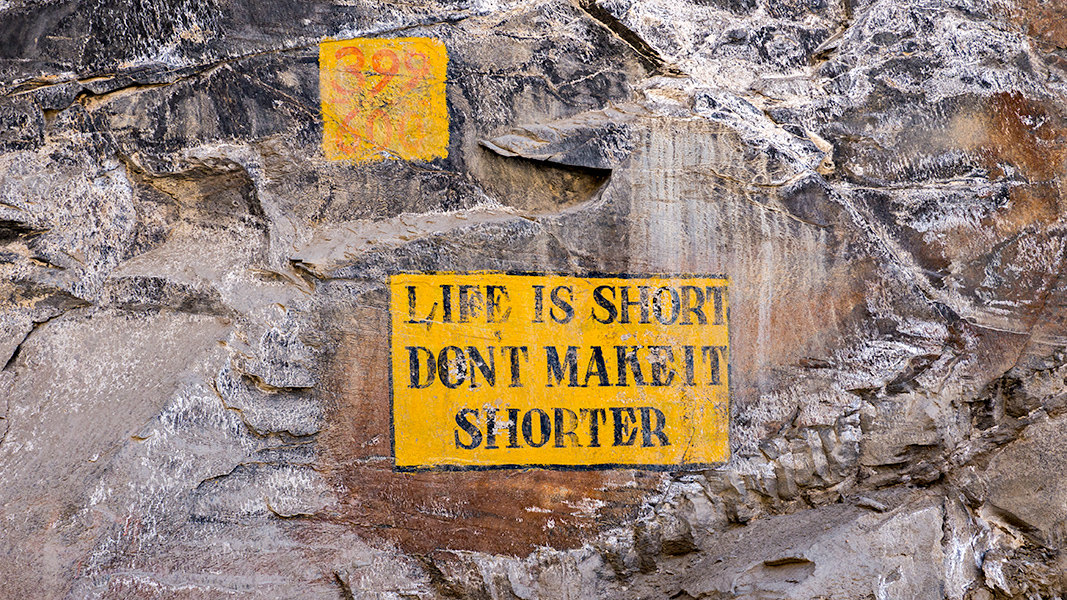 For a while after the check point, the road was smooth tarmac and even had a dotted line down its centre – the first I remember seeing since London! Just to stop me feeling too comfortable, though, was this road sign:

It was another thirty kilometres to Pooh and it was becoming a struggle. Of course, the smooth tarmac didn’t last. It was getting late in the day when Pooh came into sight, unfortunately a steep 200m climb above the NH22. I certainly didn’t have the legs left to ride up, nor did I fancy pushing the five or so kilometres just to come back down in the morning. 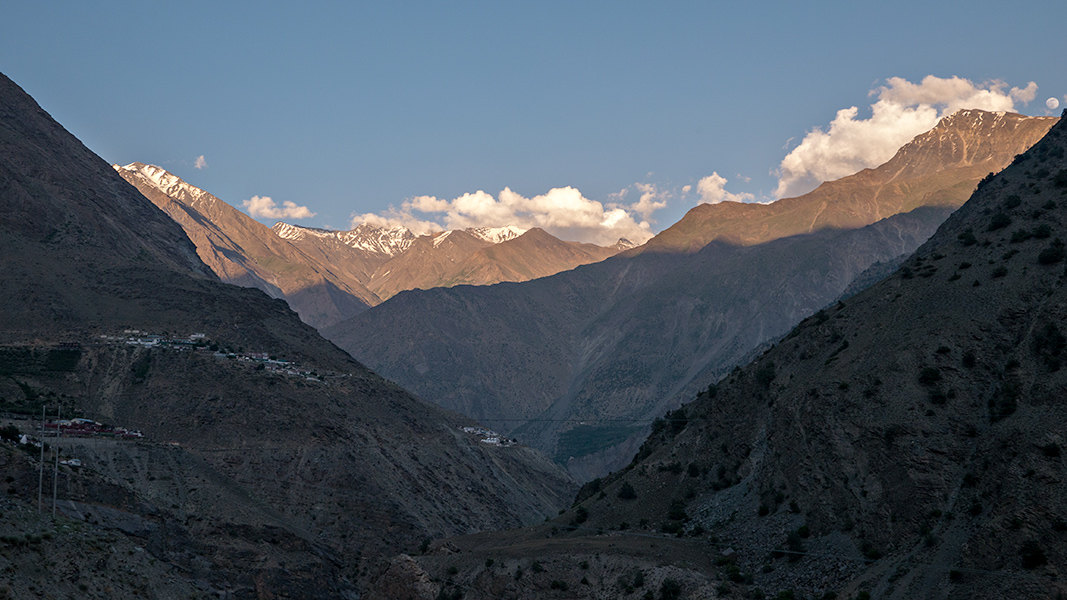 I didn’t see the Pooh general store which should have been on the highway, so I carried on into the gloom, looking for somewhere off the road to try out my sleeping bag and bivi-sac. There wasn’t anywhere flat that was off the road; it was steep slopes up on the left and steep slopes down to the river on the right. I arrived in Dubling, a very small village – which miraculously had a rustic guesthouse. A couple of young boys helped me up the rocky path and an ancient Tibetan man offered me a room for Rs 100. I had to fill in my passport details, as usual, but this time in a blank book. He’d run out of forms – the one I used as a template had the visitor’s date as 1999. There were only a handful of crumbling yellowed sheets so I suspect he has a guest every year or three. But I did have somewhere to lie down for the night. The boys took me to a restaurant which had just closed but I managed to get some momos anyway. Then, back to the guesthouse, a cursory rinse/shower from a bucket, and into my sleeping bag liner. No problem getting to sleep tonight – it had felt a long day. The ceiling/roof of my room was definitely traditional:

How can 34.5 km take six hours (not including rests!) and be so bloody hard?

I packed my bike, said goodbye to the ‘proprietor’ and went down to the restaurant. All that was on offer was a cup of chai but it helped. For the first few kilometres, the road was level (rather than smooth) and I stopped along the way to extract crumbs and pieces from a couple of creme biscuit packets that were in my rear bag. 500 calories, a breakfast of sorts. A bridge across a tributary heralded the start of the uphill. The never ending uphill. 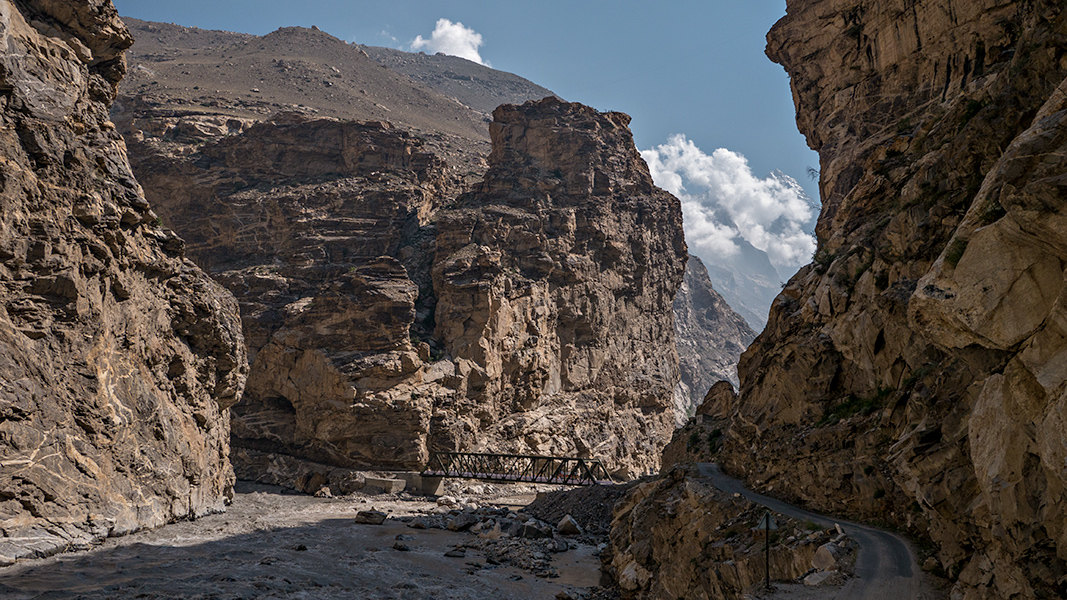 High snow-covered mountains were visible up a side valley: 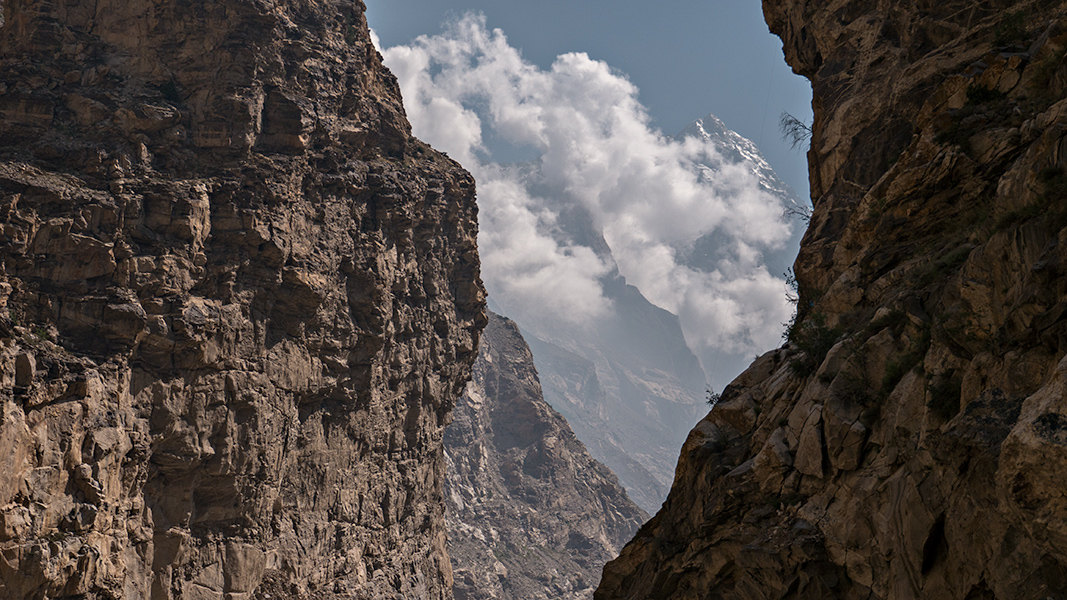 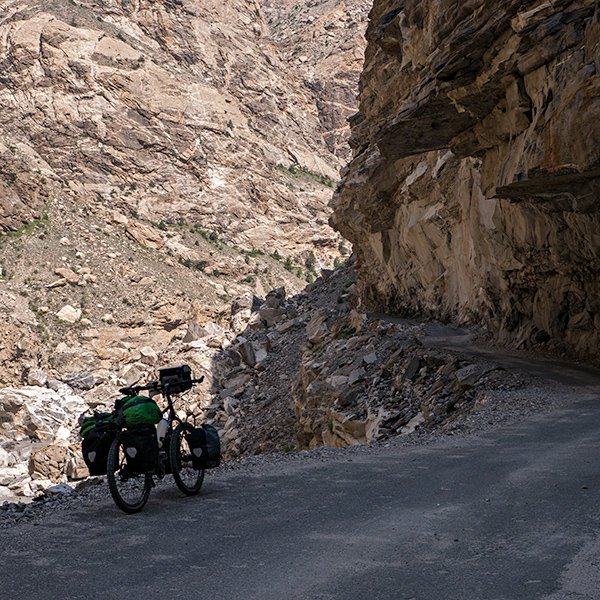 Today’s climb was from Dubling at about 2500m to Naku at 3650m. I started pedalling up the hill but could feel the damage done to my legs by the previous day’s efforts. I was proceeding at walking pace, but my legs hurt more than if I was walking. So it was going to be a hike-a-bike day. And no walk in the park, either. 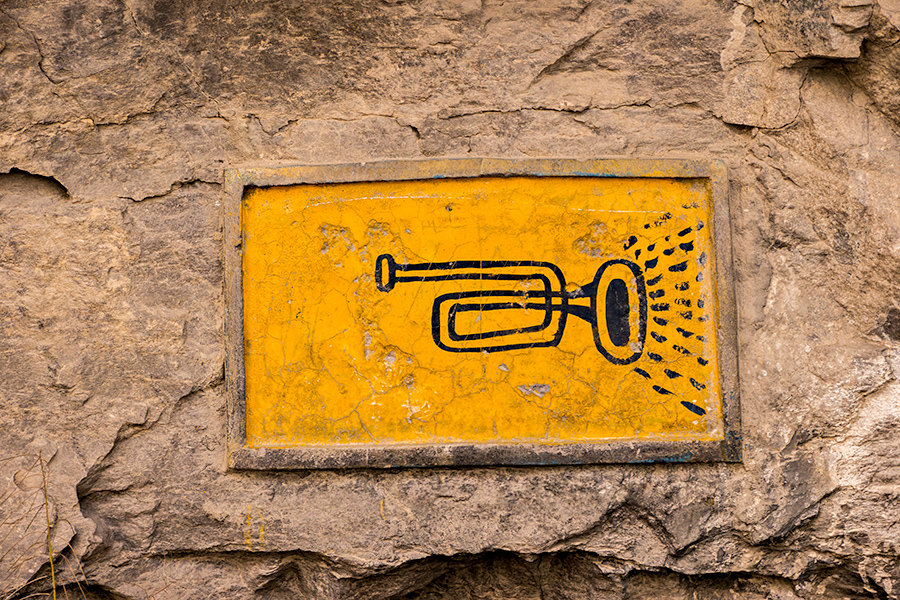 It was shady to start, the road cut through overhangs of rock and the Sutlej beginning to drop away below. Then the road cut across open slopes and I could pick out a faint line of switchbacks going forever higher. There was no protection from the sun as I plodded wearily uphill. To be fair, the road was rideable; with less load and stronger legs, it might even have been a (somewhat masochistic but) fun challenge. 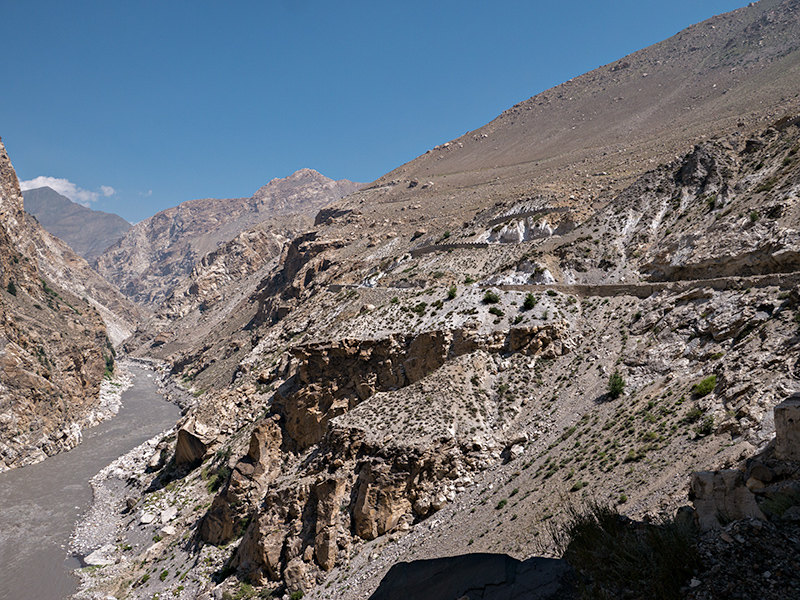 It seemed to take forever to get to the top of that first set of swithbacks. My legs were heavy, my calves complained about being stretched on the continual incline. What more can I unload, I was thinking. Do I really need two spare tubes? And two patch kits? Will it get cold enough for me to need a sleeping bag? Should I dump the pages of my Himalaya By Bike book that don’t relate to places I’m going? And how much difference will the few pounds discarded make? I had plenty of time to think, head down, plodding on. Looking back, it seemed like I’d gained quite a lot of altitude. My GPS told me otherwise. 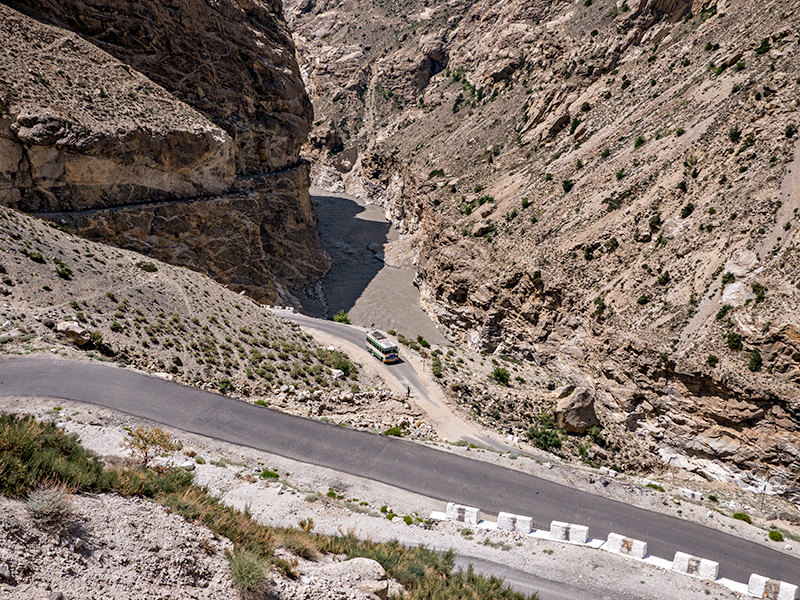 When I reached the top of the switchbacks (or ‘kazigs’), I was still less than halfway up to Nako. 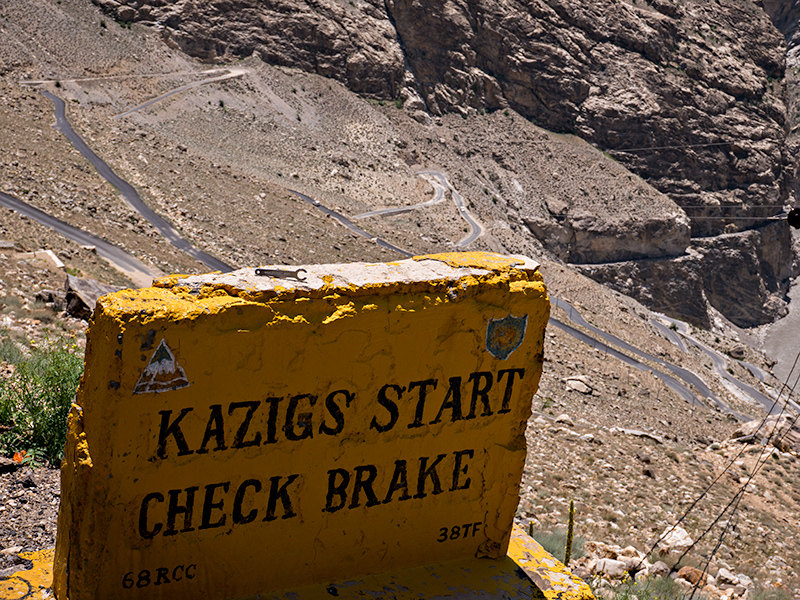 The road turned a spur and I could see the next stage of the climb. There was a patch of green that I took to be Ka; maybe I could get some lunch there? 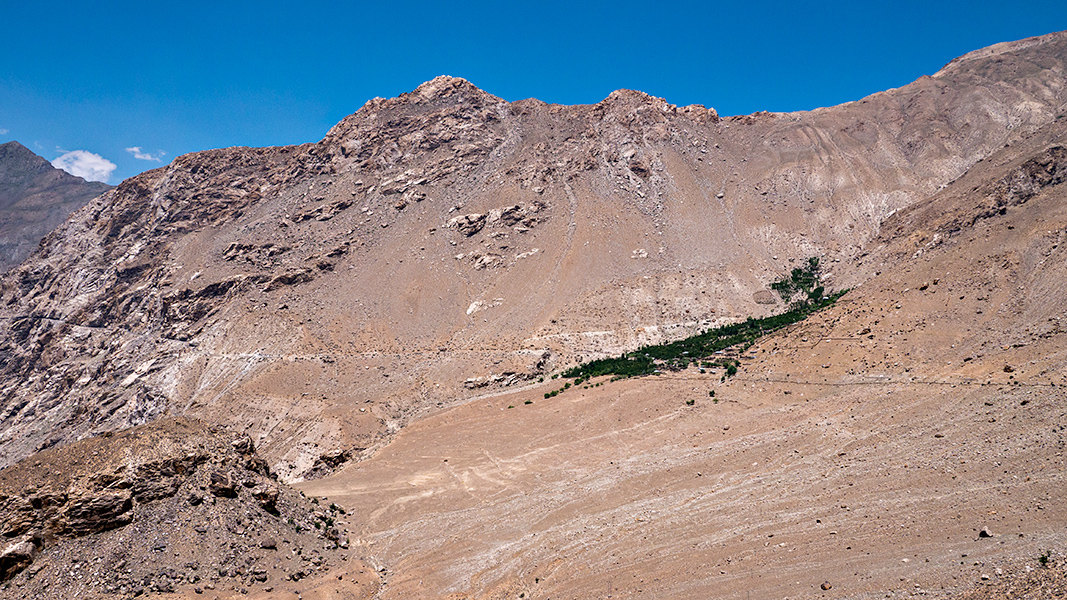 There was lunch to be had, a helping of rice and a small bowl of watery dal. With the effects of the heat, I didn’t want anything more, even if it had been available. After lunch, I filled my empty water bottles from a tap, cold mountain water, probably safe to drink… 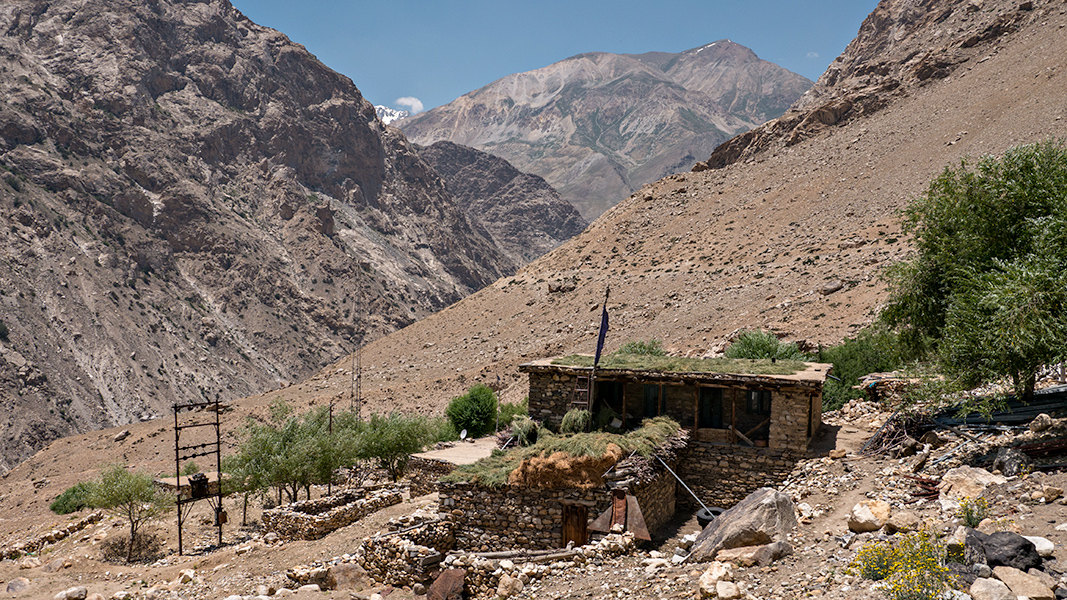 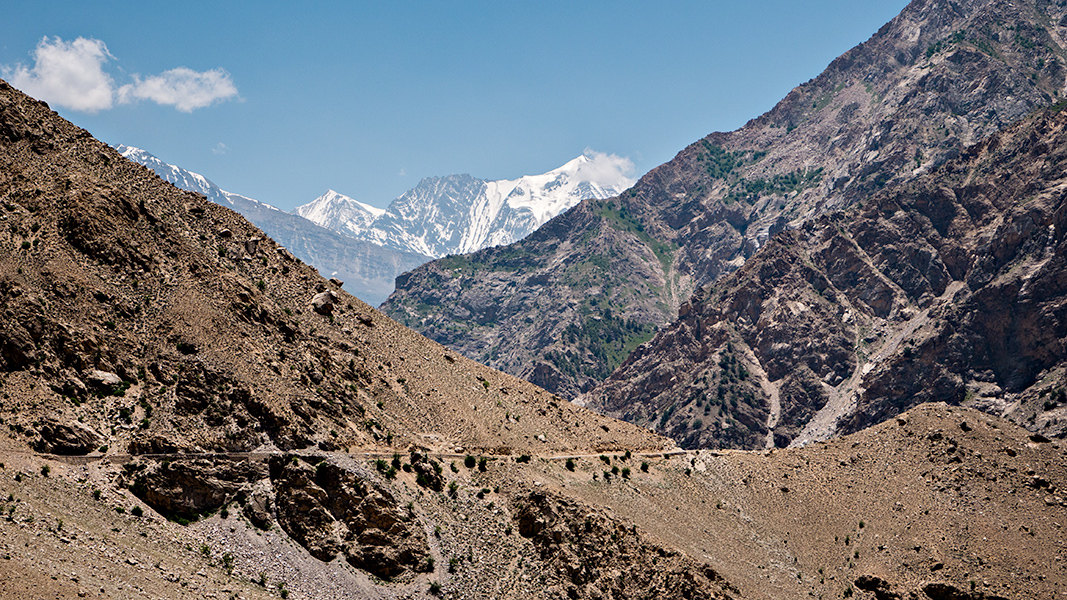 This afternoon’s route. Or part of it. 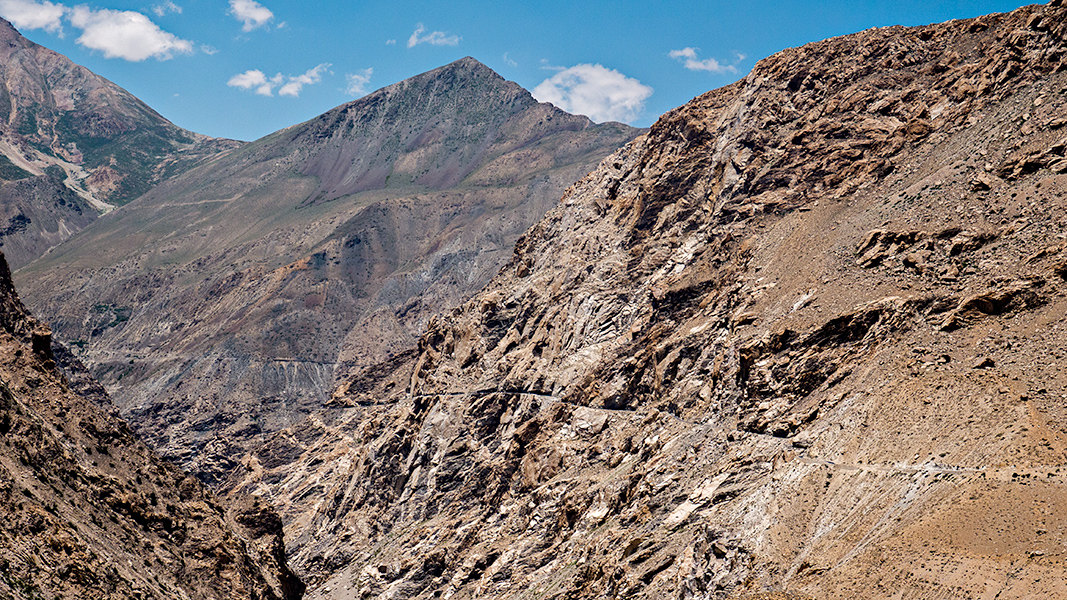 The afternoon became a bit of a blur. The road followed a cliff side for a while, with occasional shade. Then another set of switchbacks. 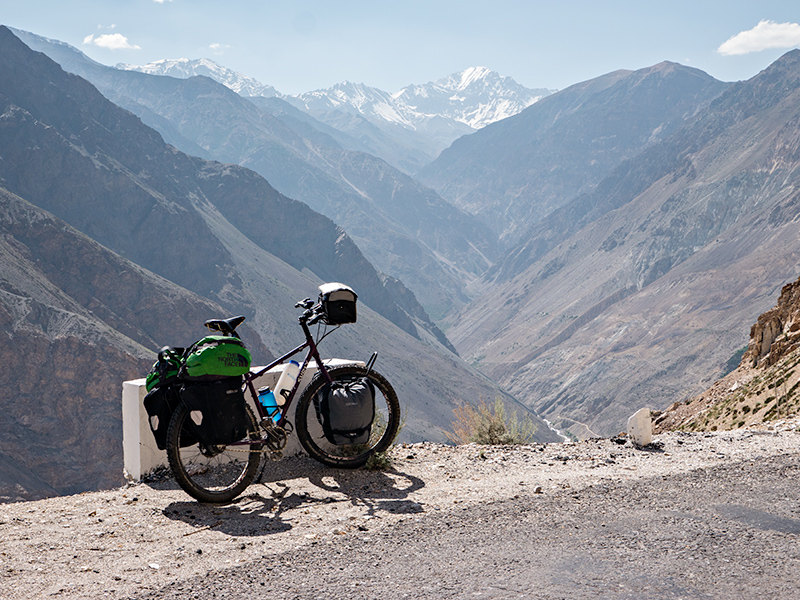 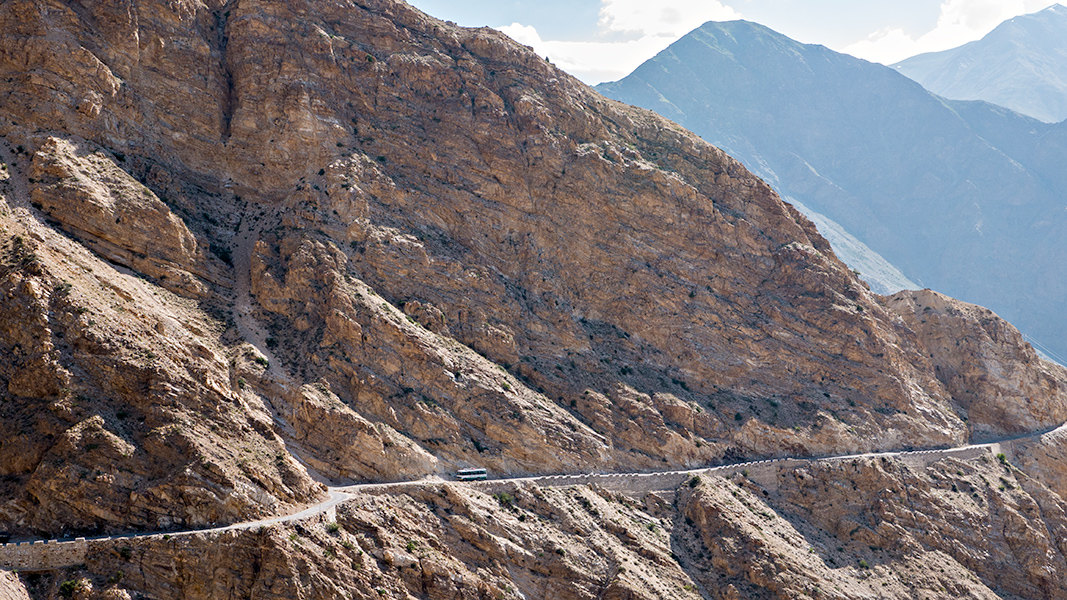 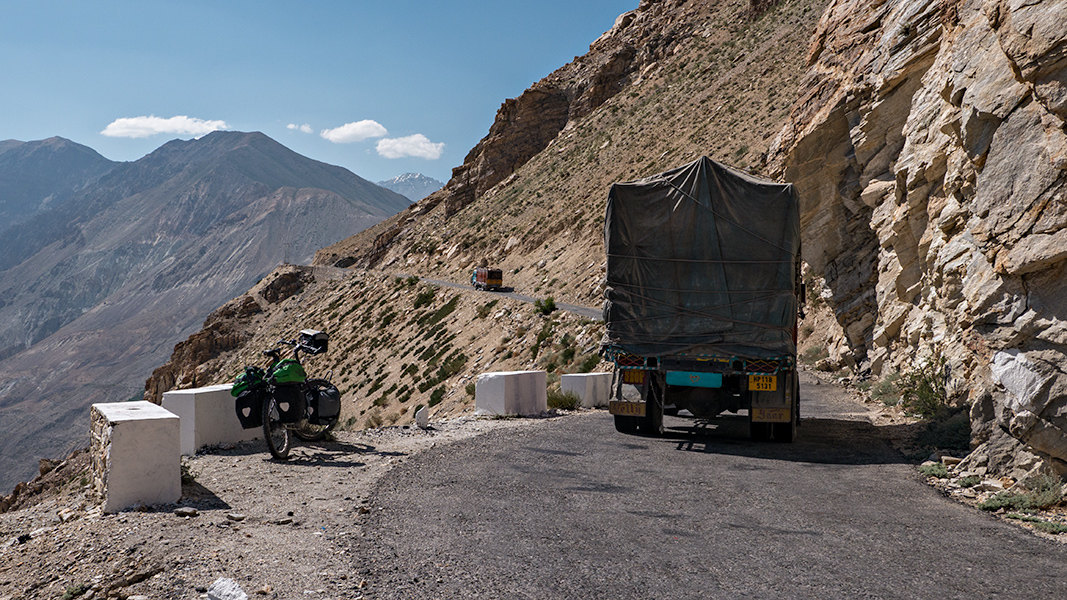 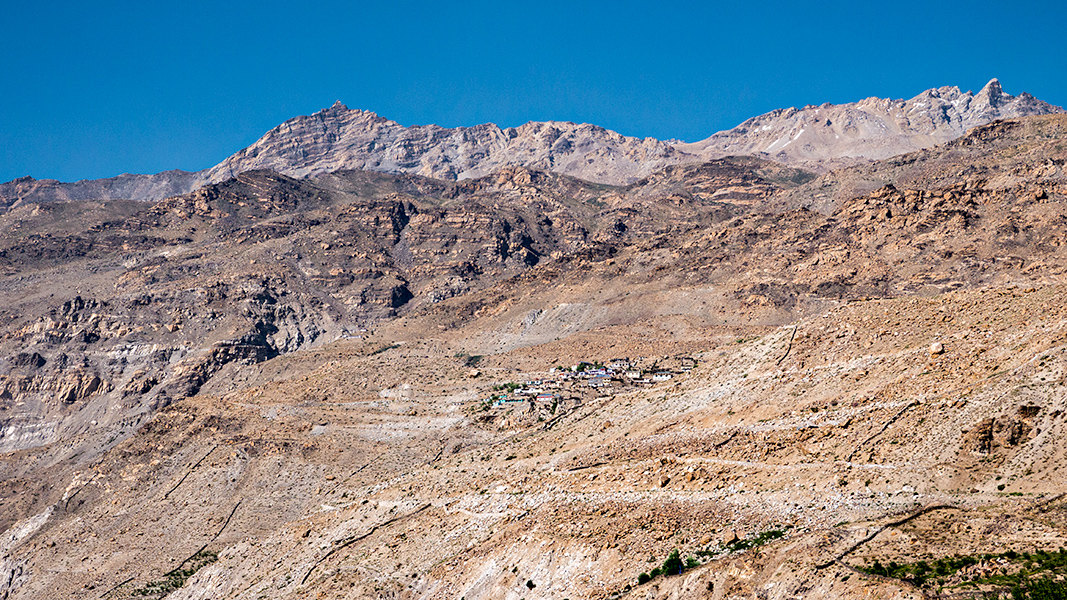 Traffic was light, a vehicle every five or ten minutes: large army four-wheel drive trucks, a bus or two, a couple of Enfields, some private cars. The driver of one of the army trucks indicated the back of his truck, offering me a ride. For some inexplicable reason, I nodded my thanks and waved him on. Maybe I thought that having come this far, I may as well see it through. A backhoe went past and the driver offered his bucket for my bike and myself but again I declined; he already had a dozen or so roadworkers aboard.I came to another dhaba and stopped for a drink and bought some biscuits. A couple of men from Chandigarh, on new looking Enfields, arrived and ordered dal; I wasn’t feeling hungry but had one too. I couldn’t finish it but it was a bit more energy. I had to pose with them for photographs; their wives thought they were crazy riding their Enfields through Spiti. Now, the men had evidence that they were relatively sane. 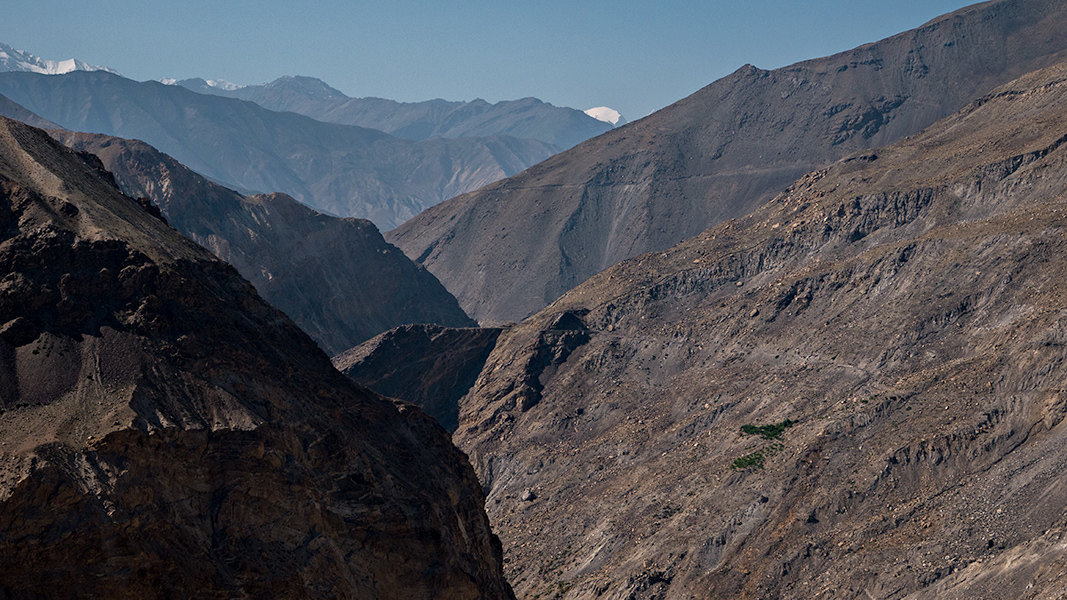 Finally, I arrived on the border of Tako, to be welcomed by a few of the local schoolboys. Two had single-speed Heros. Which they took no time in showing me that they could ride uphill. Why was I walking, their cocky expressions seemed to say. (Actually, they were nice and friendly. As has everyone so far on this little adventure.) There was a little downhill into town so, for the first time in hours, I got back on my bike and coasted. There was a short uphill to the hotel that I managed to ride. Two Israeli girls, seeing my (seemingly triumphant) arrival, gave me a little round of applause.

If they but knew!