I found a passable hotel (as in one that would be easy to ride past if there were alternatives) in Tapri so decided to stay. Good thing, as it happens.

There is no cell phone coverage in Tapri, at least not with my provider Aircel. Maybe it’ll return further ahead?

I must have been more tired than I thought – I watched the first half of the France – Nigeria World Cup match but it was a struggle. There wasn’t much of the ‘beautiful game’ in evidence and I kept wanting to shut my eyes. So I switched off at 10:30 and slept right through until awoken by other guests leaving noisily at 6:00 am. I was still feeling weary but couldn’t get back to sleep so I was out of the room shortly after 7:00, had a light breakfast in the hotel and was riding out of Tapri for the shortish, and hopefully fairly easy, few kilometres along the river bottom.

I was hoping to save my limited resources of energy for the steep climb up to Sangla which would start in an hour or two. No luck. Just past what appeared to be the town limits, there was a rope across the road; it was closed. A young man told me ‘landslide’ but that the detour (he pointed to the left and up) was a ‘pretty road.’ Pretty damn steep and pretty damn high, I suspected. Correctly. 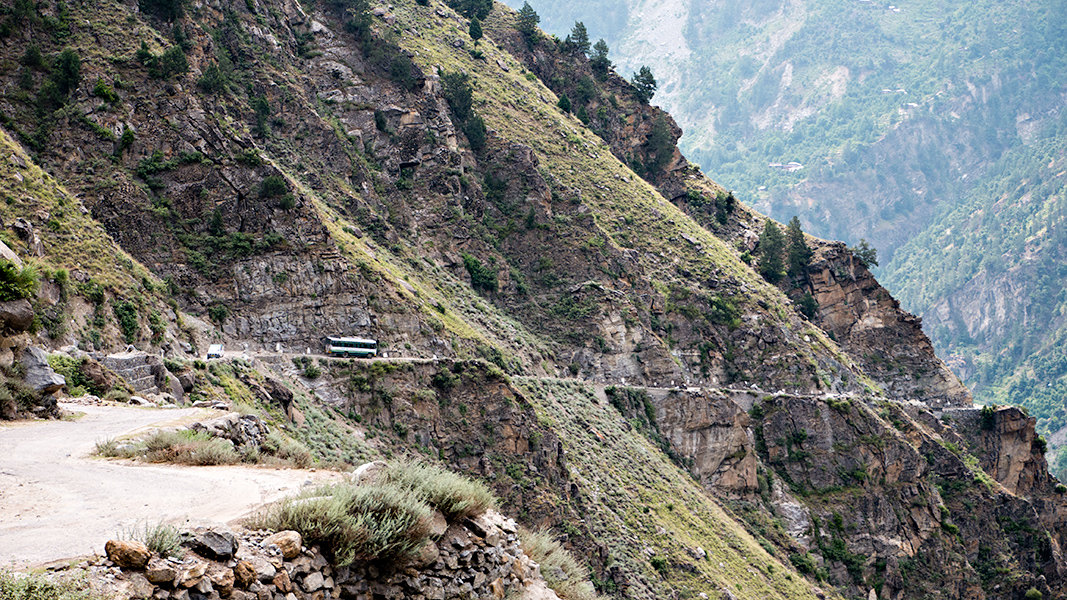 Now 13km along this ‘pretty’ road, I am still almost immediately above Tapri, my starting place. 630m above it. The morning has disappeared with many stops to admire the view (rest my legs and get my breath back, more like). It’s mostly been pushing steeply uphill on a narrow road with switchbacks, hard hard work for this guy. The GPS tells it best: 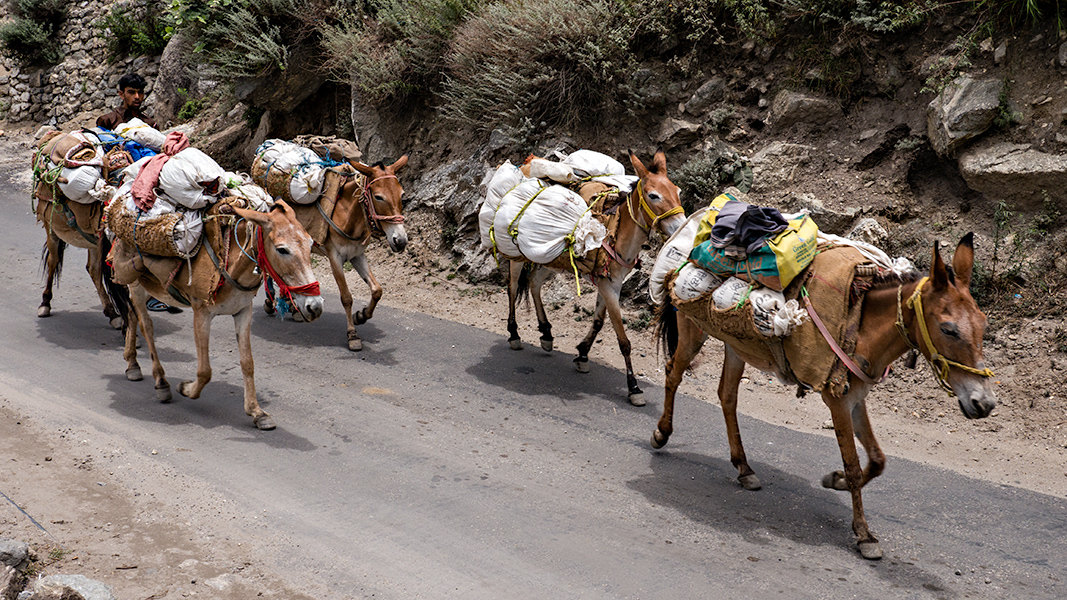 It doesn’t look like Sangla is going to happen so I’ll head to Rec(k)ong Peo instead – I thinks it’s closer and not as much climbing – but it’s still going to be a tough day with this unanticipated diversion.

It looks like the worst of the climbing is over; a road visible in the distance appears to be heading back down towards the valley, maybe down to Kircham. That would be nice.

It hasn’t been all bad – the scenery is better up here even if the buildings do show the all to. familiar evedince of ‘concretification.’ There have been a handful of traditional wood buildings – warmer in winter and cooler in summer than their modern replacement.

Much of what I pushed could have been pedalled. But it’s easier walking at 4-5 kph than pedalling at the same speed.

The rest of the day…

The road still had more uphill but it was interspersed with some level, and even downhill, sections. It came, more or less, to an end at a large village (it had a school). (This is also where the road ends on my GPS map.) I followed a steep, dusty, rocky dirt road downhill, pausing frequently to allow uphill passage to buses and other diverted traffic. Surprisingly quickly, I could see the ‘main’ road below as my track paralleled powerful tumbling streams pouring out of the heights and down to join the brown-grey Sutlej River.

It wasn’t actually Kircham where I regained the NH22; Kircham was a further 3km. So the five or six hour detour replaced about four km of gentle cycling and had trashed my legs. A couple of chais at a roadside dhaba revived me somewhat and I rode on along dusty and bumpy roads. It may be time to switch from my slick tyres to something more suited to rough roads but there wasn’t time, or shade, for me to do it then.

Kircham is just a big hydro project and dam. The road signs showed 25km to Peo and 19km to Sangla, although I knew that Sangla was higher. Also, the Sangla valley (or Baspa Valley, for the river that runs through it) is a sidetrip, not necessary but sounding nice. Against all better judgement, I took the turning to Sangla. Up and up and up. Push and push and push. 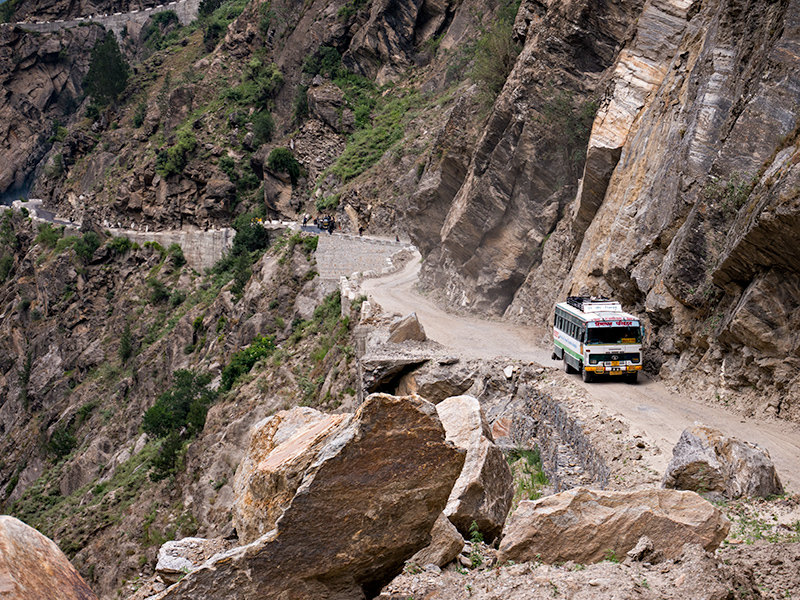 (My bike is so heavy. The road is so rocky and dusty. I’m too old and sensible for this; I could be home with my wife and son, taking it easy, and watching the World Cup in comfort, on a big screen! Ah, too late for that now.)

Progress was slow and painful but the views were spectacular. Sections were recently refinished which meant that there was only the gradient to contend with, not bumps and potholes that brought forward motion to a shuddering stop.

Some of the road had been recently widened with concrete, allowing vehicles to pass more easily. There were widely-spaced concrete blocks that served as a warning of the steep drop to the valley hundreds of metres below but with plenty of room for a bus or truck to drive through the space between the blocks. The occasional truck crawled down the road, the buses with a bit more confidence but still carefully.

I noticed an increasing disparity between the distance covered today on my cycle computer and on my GPS, with the GPS being the larger number. I’m afraid, some of my progress has been too low to register on the cycle computer :(.

It was getting late and still six kilometres struggle to Sangla when a passing truck, at my wave, stopped and loaded my bike into the back. I rode with the bike and three local young men from a village above Sangla; two of them sat cross-legged on the rack over the cab, unconcerned, as we careened round bends overlooking the valley bottom.

The light was fading when we arrived in Sangla and I found the Mehta Resort, a simple building with basic rooms run and ownd by a family (as far as I could tell). I’ll have to rest up here for a day or two. When I was checking in, I asked whether they had the satellite channel (Sony6) for the World Cup. No. Never mind, I’ll be sleeping.

I ate dinner at the resort at 8:00pm, after a much needed shower. One of the family, a young man who spoke good English, kept flicking through channels. It’s the same the world over, I thought, as he clicked from Wimbledon tennis to some channel and back repeatedly. But I had it wrong; the family had activated Sony6 and he was checking to see whether it was available yet. That was really nice of them; I’ll have to stay awake and watch Argentina – Switzerland now.

Baled? Maybe, but this isn’t on my main route. And I did say before I left that I wasn’t too proud to take the bus if the going got too hard. Not that I really ever believed that.