This is the section of road that I’ve been waiting so long for! Although the early part of the day was pretty ugly…

I’d promised myself a 6:00 am start but hadn’t really believed it. Not bad though; I was ready to order cheese omelette and toast by 6:20. Probably my earliest start yet, despite all my early good intentions to be on the road at 5:00 to avoid the heat. Not that heat is really an issue now, unlike down in Chandigarh. That feels a long time ago…

It was a steady drop from Killar to the Sach Pass turnoff, which continued downward towards the river. I could see the Sach Pass road, climbing back up on the far side of the valley. That would take me towards Dalhousie and the Kangra Valley; another beautiful area but a route for another time. 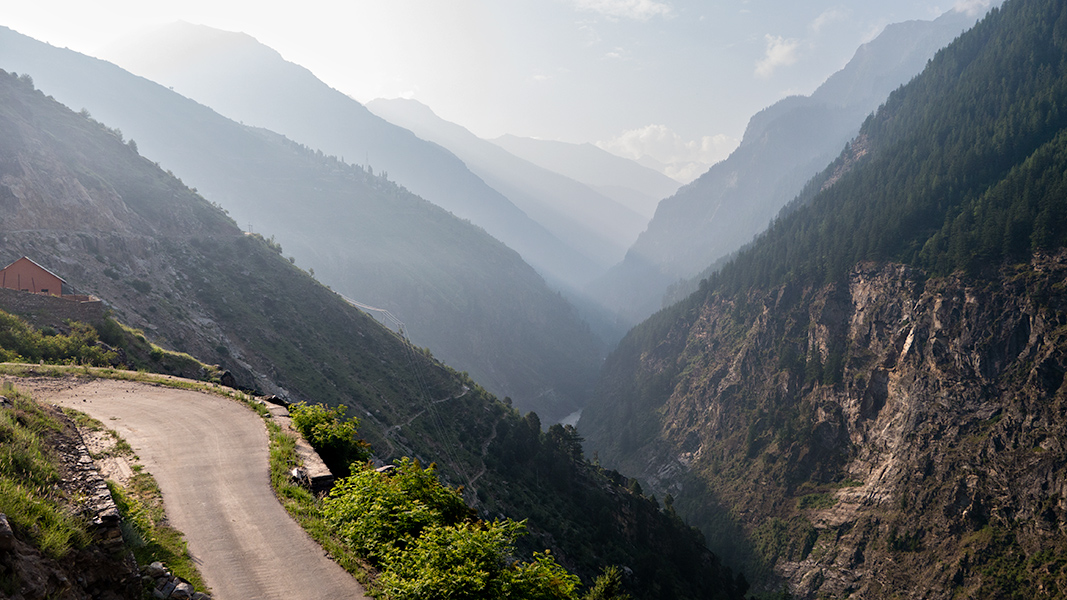 The beginning of the Sach Pass climb, across the Chenab river on the other side of the valley:

My route contoured along, sandy but fairly smooth. A little traffic: one truck carrying rebar and some workers, and a bus that I suspect only goes as far as Dharwas, just a few kilometres ahead.

(This suspicion was confirmed shortly afterwards when the bus reappeared, now almost full, heading back towards Killar. A morning ‘commuter’ run?) 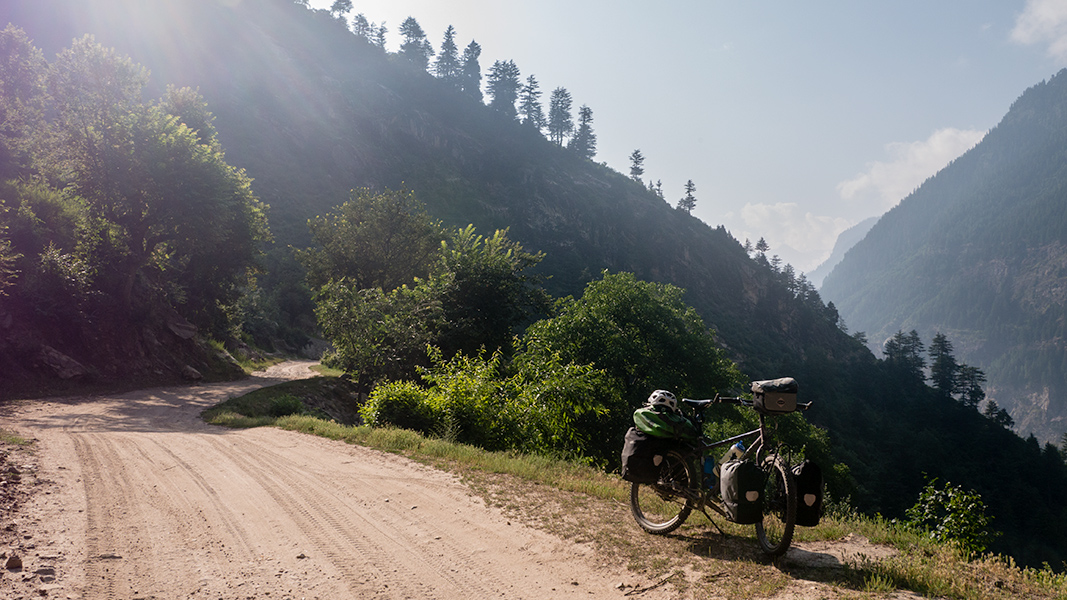 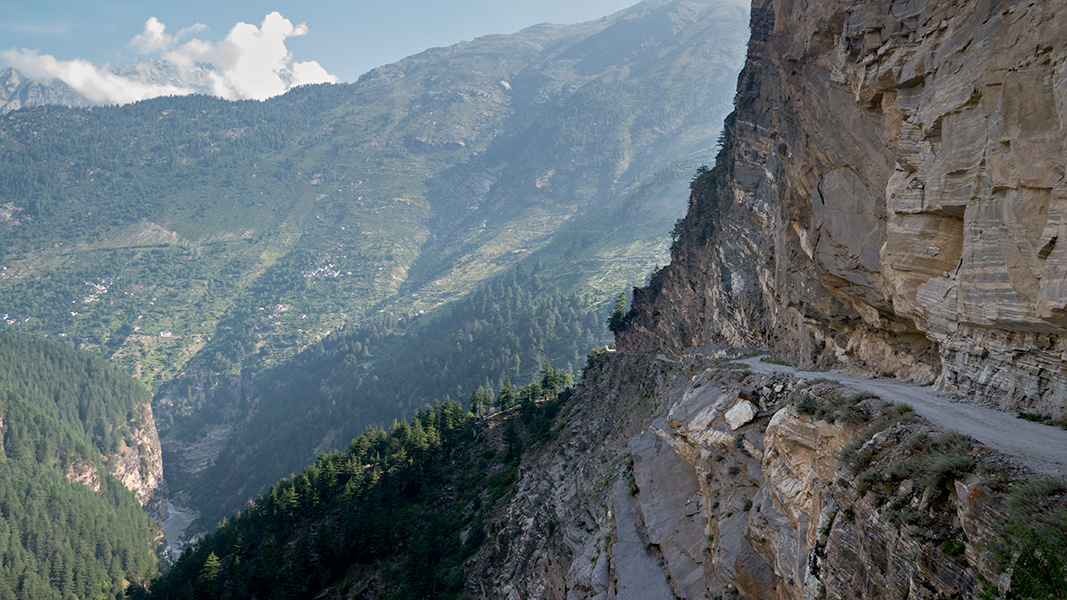 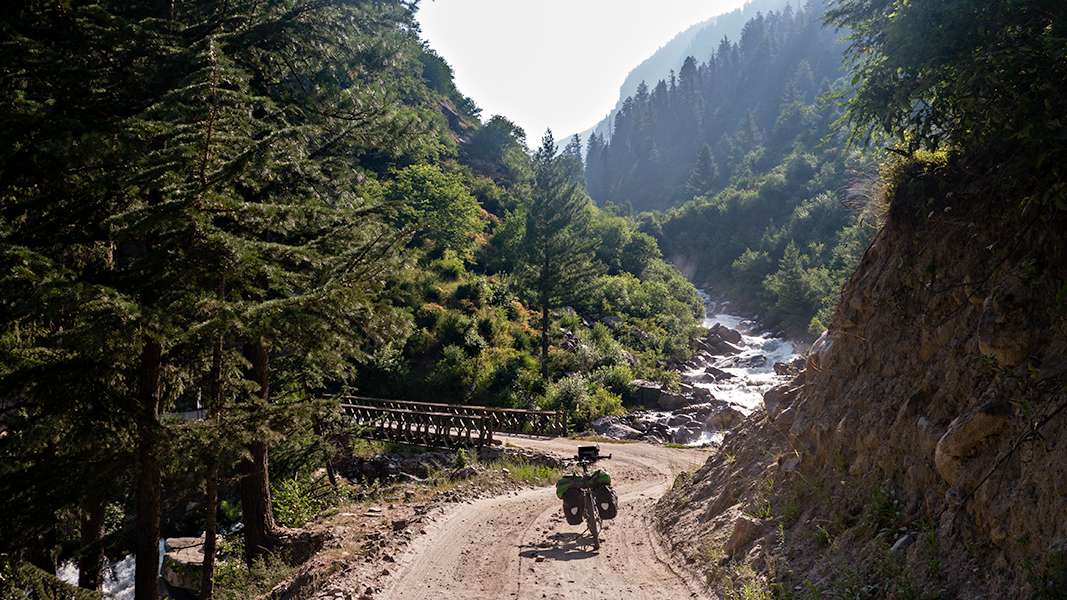 Drop, drop, drop on a predominantly sandy surface. No tarmac this morning. Or for a while, I suspected. After about 10 km, there was a turnoff back almost in the direction I’d come but steeply uphill. I’d tried to put today’s route on my GPS and now it was telling me to take the U-turn. Looking at the map, this didn’t make much sense so I continued straight, then down hairpins almost to the river.

Another beautiful solitary morning in paradise: 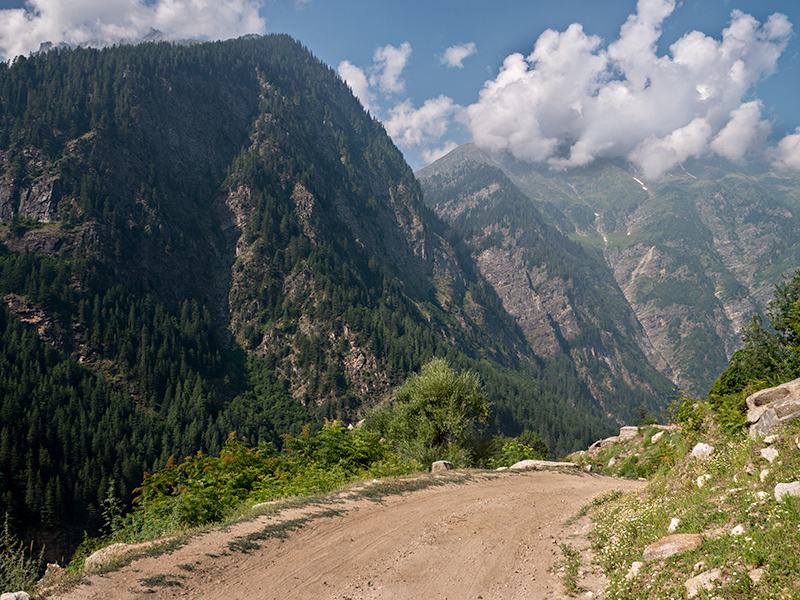 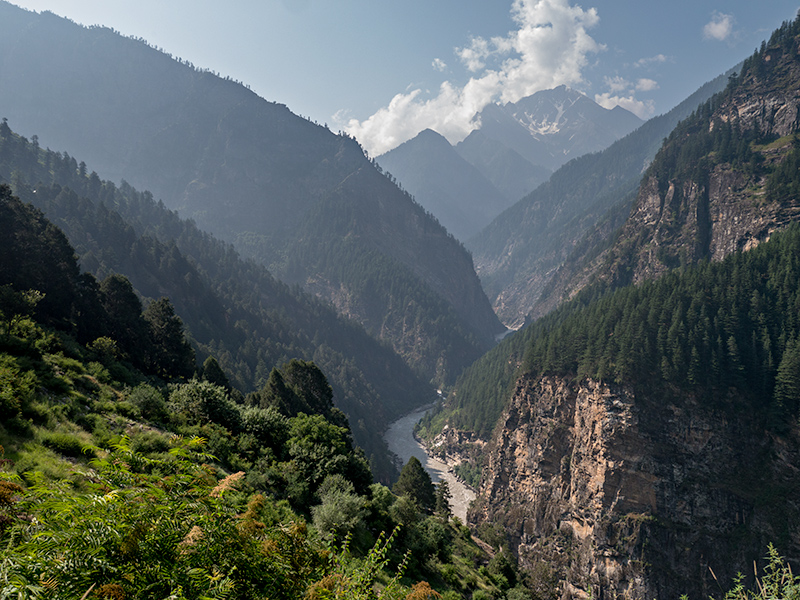 This is the Pangi Valley I’m travelling through. Road construction still seems to be a major employer in the region. Big blocks are broken down (by sledge hammer) into smaller blocks for wall construction or (by ‘toffee’ hammer) into 2-5cm diameter ‘pebbles’ to be compacted and covered with asphalt. One day… 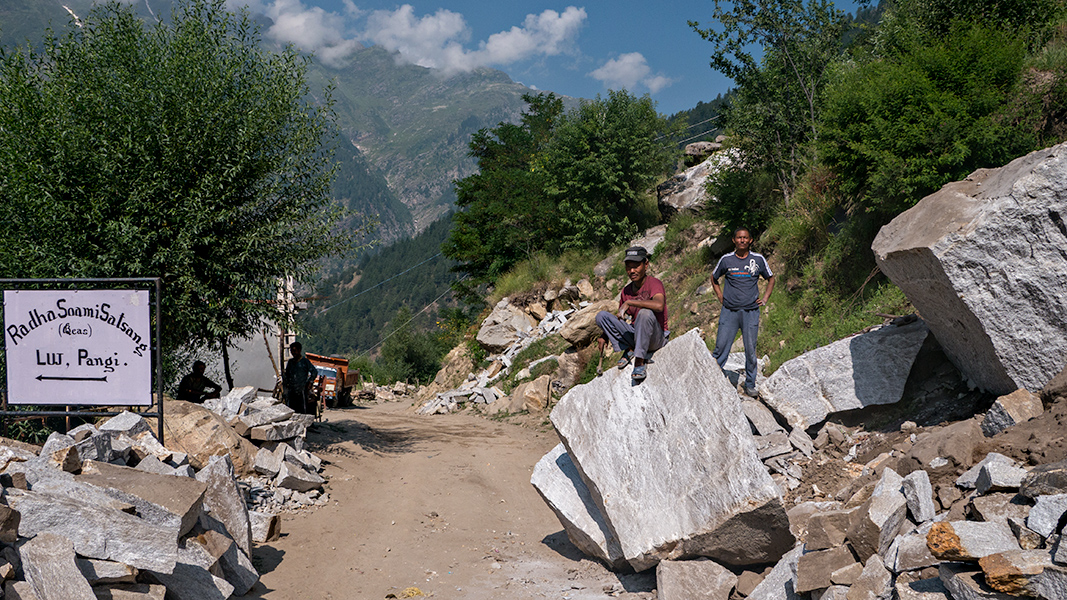 Short-haul pack animals, bringing sand up from the river banks: 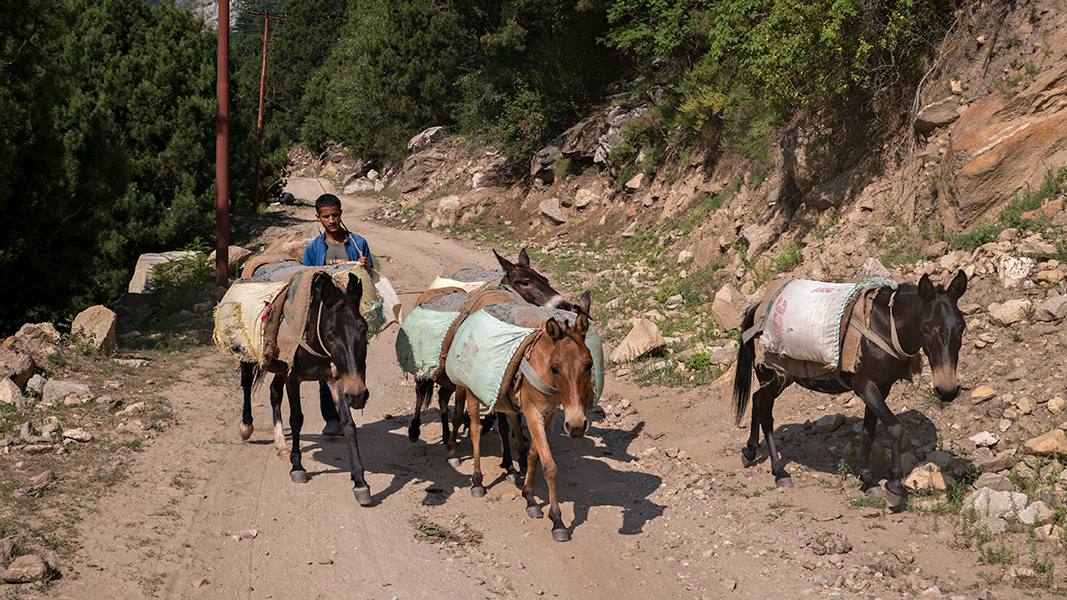 After weeks of such roads, this sign seems a little redundant: 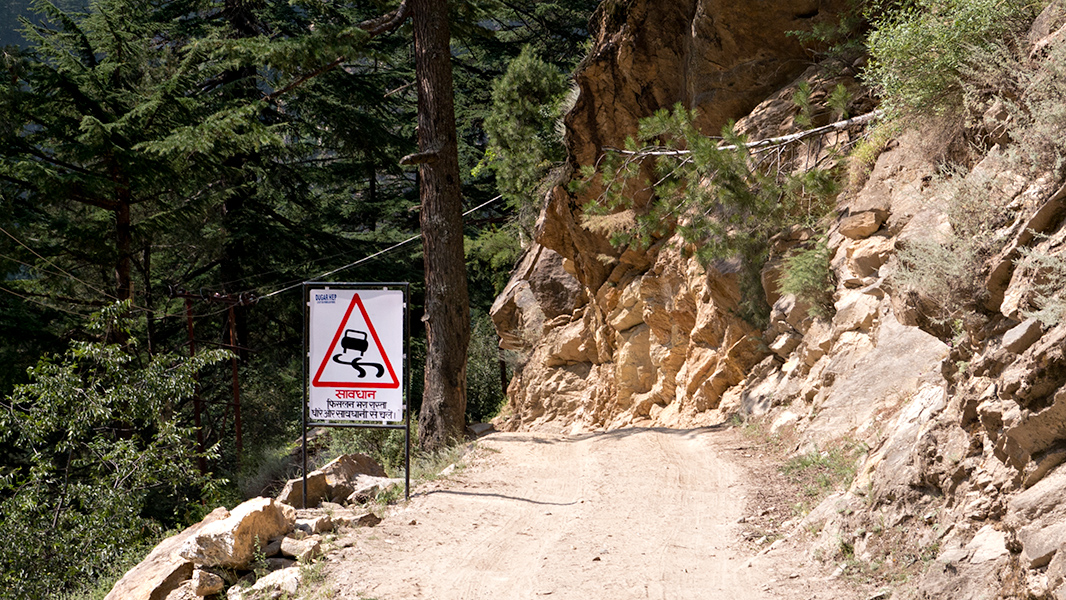 At 10:00 am, I went through passport control, leaving Himachal Pradesh for the state of Jammu and Kashmir (J&K). It was still, I was told, 130 km to Kishtwar; I hoped not, as I’d calculated the full Killar to Kishtwar distance at about 120 km and I just covered 18 km of that. Well, we’ll see…

I couldn’t find out any information about other cyclists on this route – not today, not this week, not ever, seemed to be the consensus but much may have been lost in translation. The HP policemen’s English was somewhat rudimentary (though much, much better than my non-existent Hindi). I also learned that there was a guesthouse in 37 km although I didn’t have much confidence in such a precise distance provided. 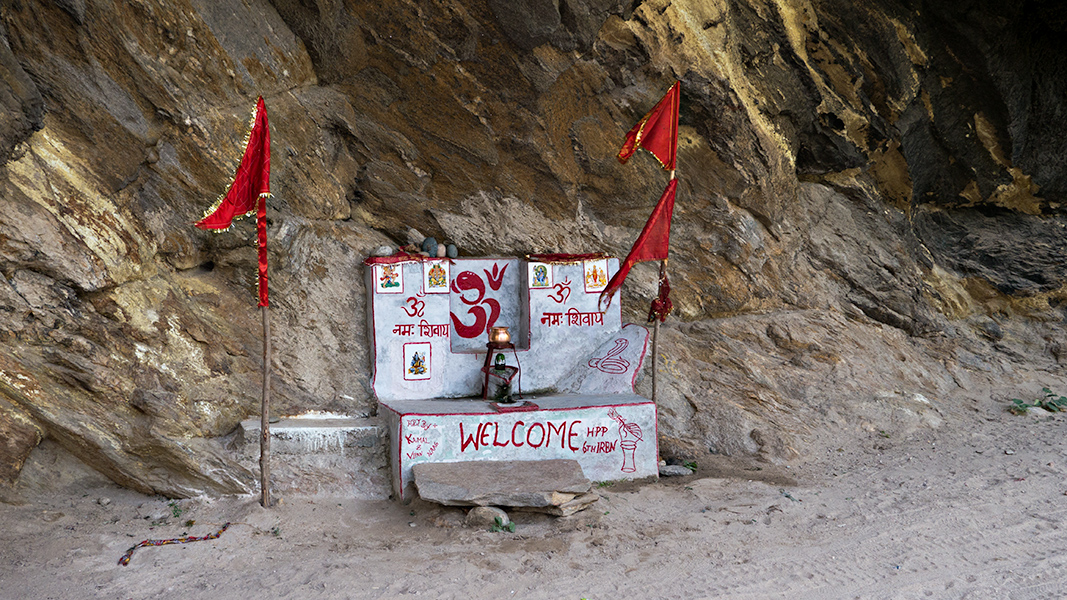 The road dropped roughly into a side valley, past a ‘Welcome to Himachal Pradesh’ shrine for voyagers going in the opposite direction, over a bridge and to a sign that told me that it is 385 km to Srinagar (my proposed route over Sinthan Top is about 85 km shorter but involves a significant climb from Bhandarkot at 1150m to Sinthan Top at 3800m). At an earlier time, the sign might have told me much more. 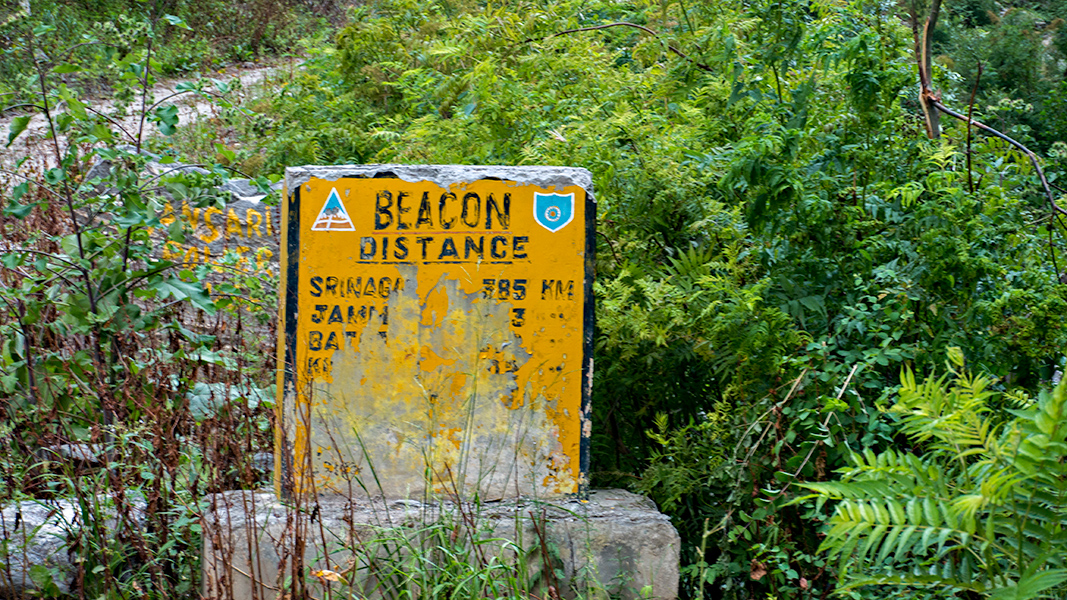 At this point, my day fell apart. For a while.

The road was a steep uphill rock-sand mix with riding not possible. There was a lot of one-step-up, slide two-back-down, with a pause for breath necessary at each shady spot. There were not enough shady spots. 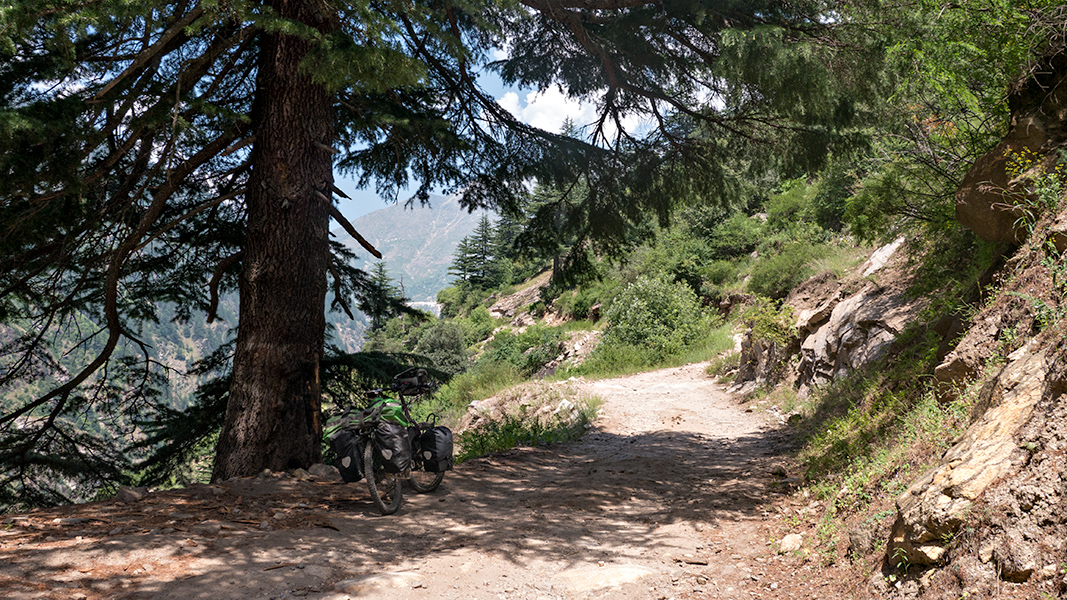 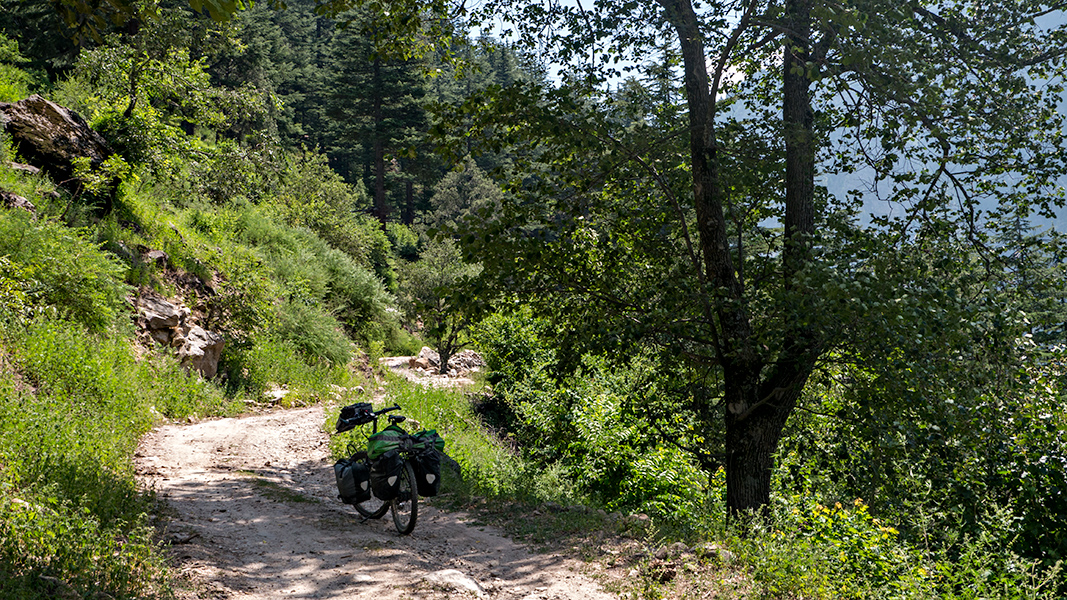 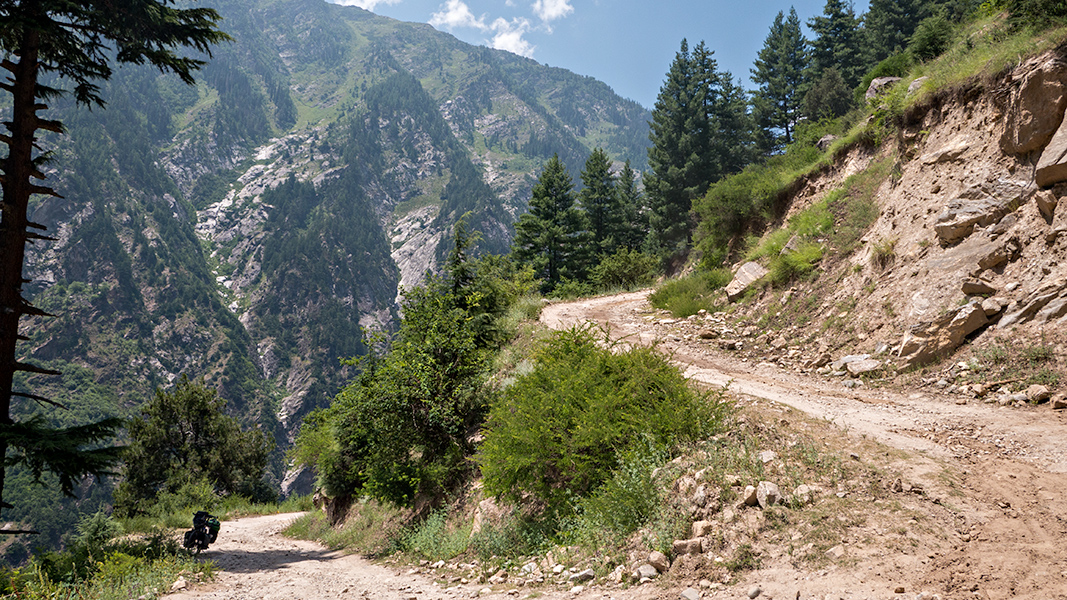 I became quite inventive with my reasons for stopping and resting. Not just the usual photo-ops; I found my position on the GPS map and recalibrated the altitude setting (bad news; I’m lower than the GPS was telling me, indicating more climbing). I even took time to smell the ‘roses’ that were growing wild along the roadside: 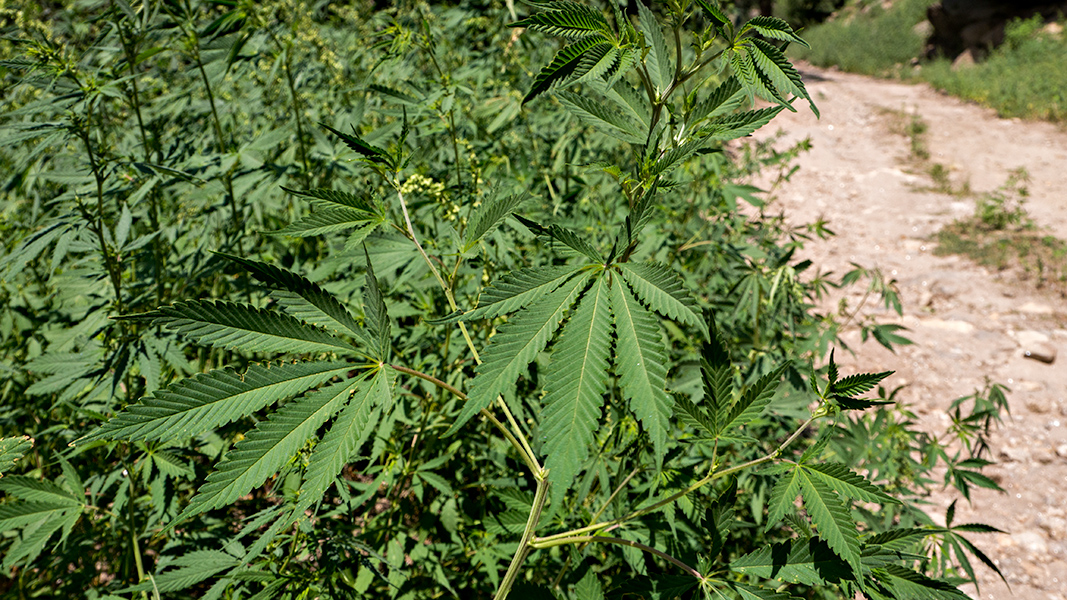 I wasn’t the only ‘pedestrian’; I played leapfrog with three men walking in the same direction. They were going to Gulab Garh, which I knew to be before Kishtwar although I didn’t know just where. (My map had a gap in it – on one side, the map ended before reaching Gulab Garh and on the other side, the route picked up after Kishtwar.) For a while, they would stop at one shady stop and I would continue to the next, then they would pass me as I rested. A couple of share-4WDs passed me but otherwise there was no sign of humanity. 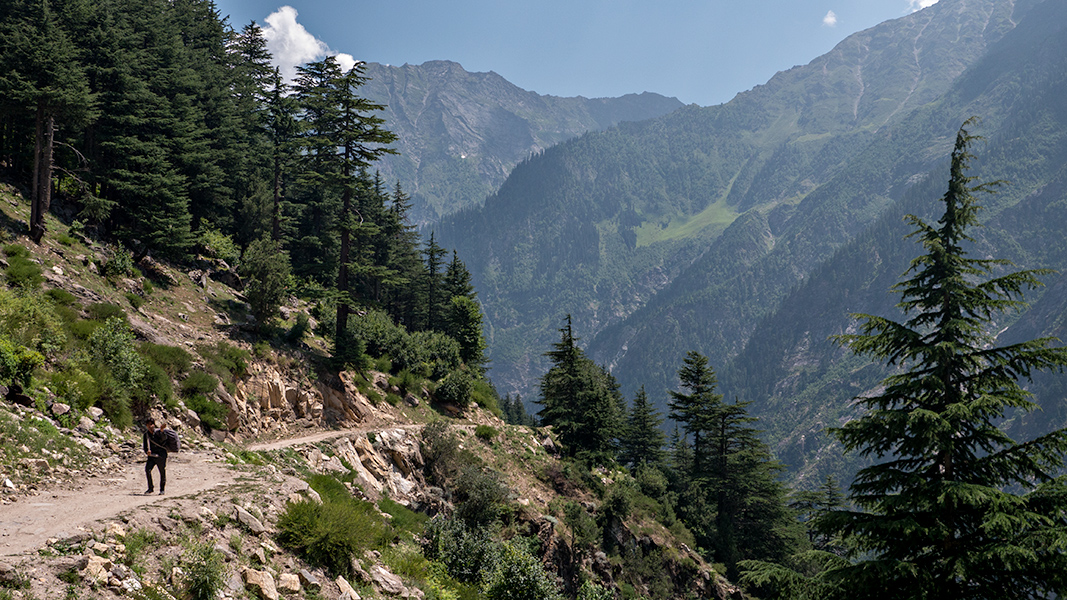 It didn’t help that each step hurt just where I didn’t want it to. I was peeing frequently, painfully, and bloodily. My enforced rest in Keylong, and the course of antibiotics I took there, hadn’t done the trick. It didn’t take long on anything but the smoothest of road surfaces for the problem to return. It’s a shame, because it is sapping my energy and my ability to enjoy this incredible location.

Eventually, I reached the end of the uphill. (It was only a climb of about 600 m from the J&K border; the climb over Sinthan Top on the way to Srinagar is around 2600 m. I can hardly wait.)

And then, still far ahead, I was greeted with the sight for which I had waited so long: 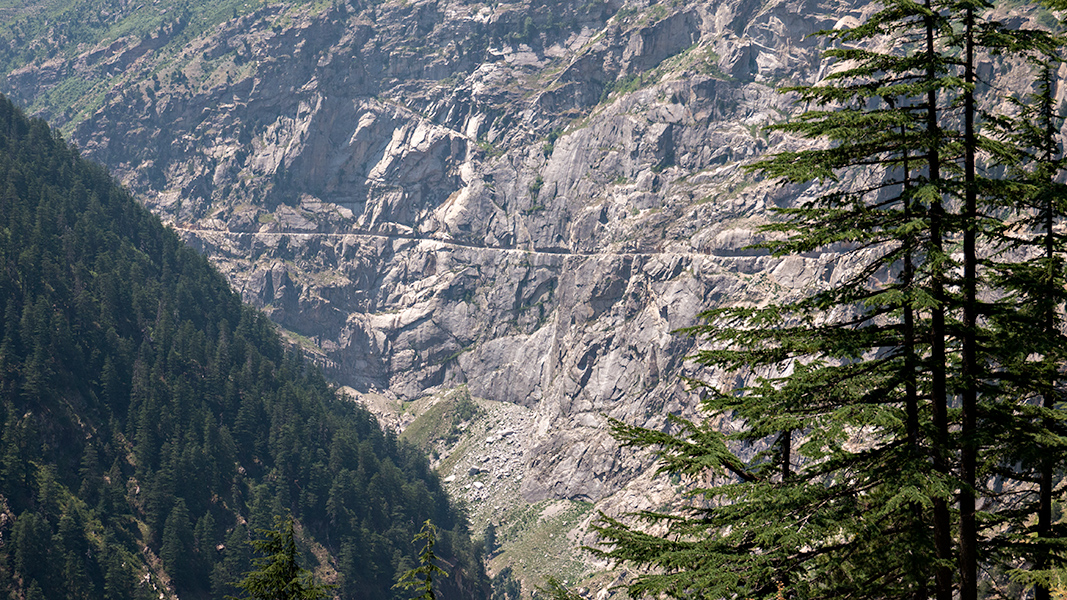 This looked to be the section of road that I had seen videos of: one from Mick Fowler & Co. in here last year to climb Kishtwar Kailash and a couple from Indians who had ridden it on Enfields.

There was a bar across the road at village of Ishtiyari (Ishtyari on Google), Paddar, with the sign ‘Stop’ on it so I traipsed down the steps to the police station. They weren’t interested in me so I was free to continue. Not hurriedly, though. I wanted to enjoy the anticipation of what lay ahead. 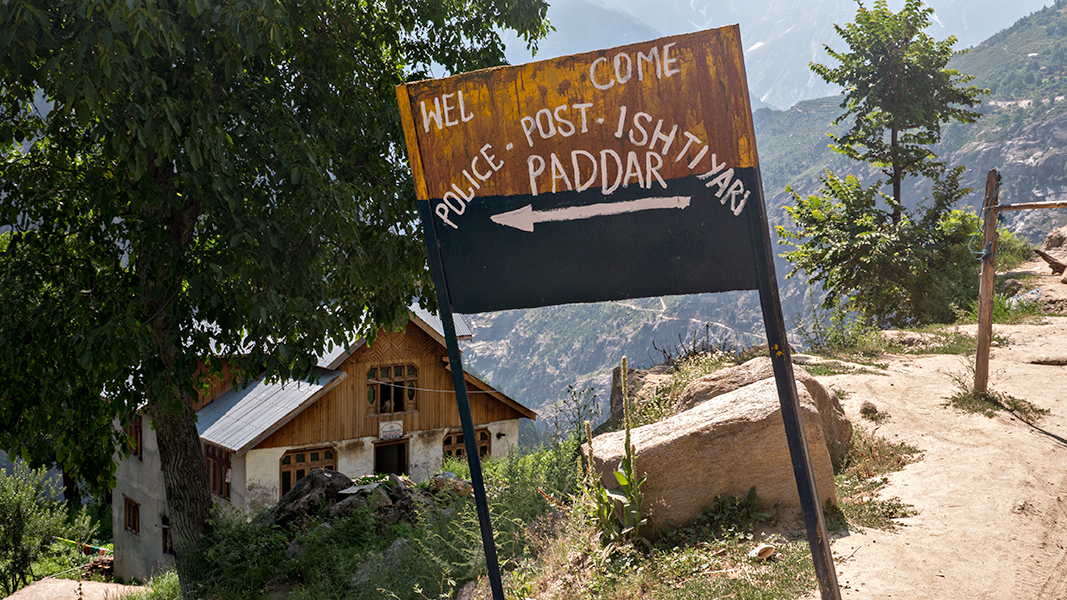 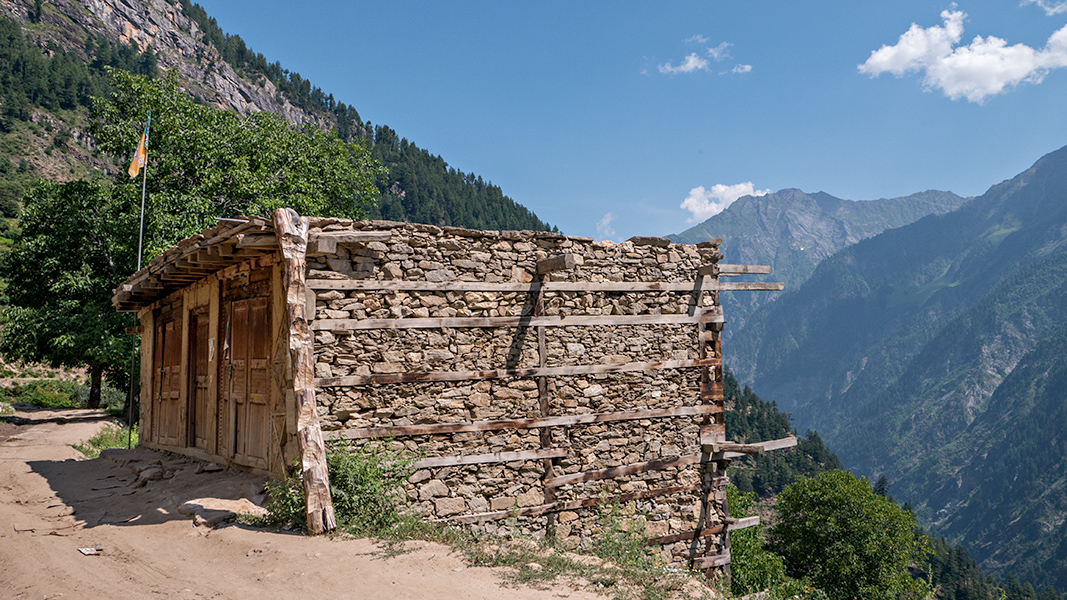 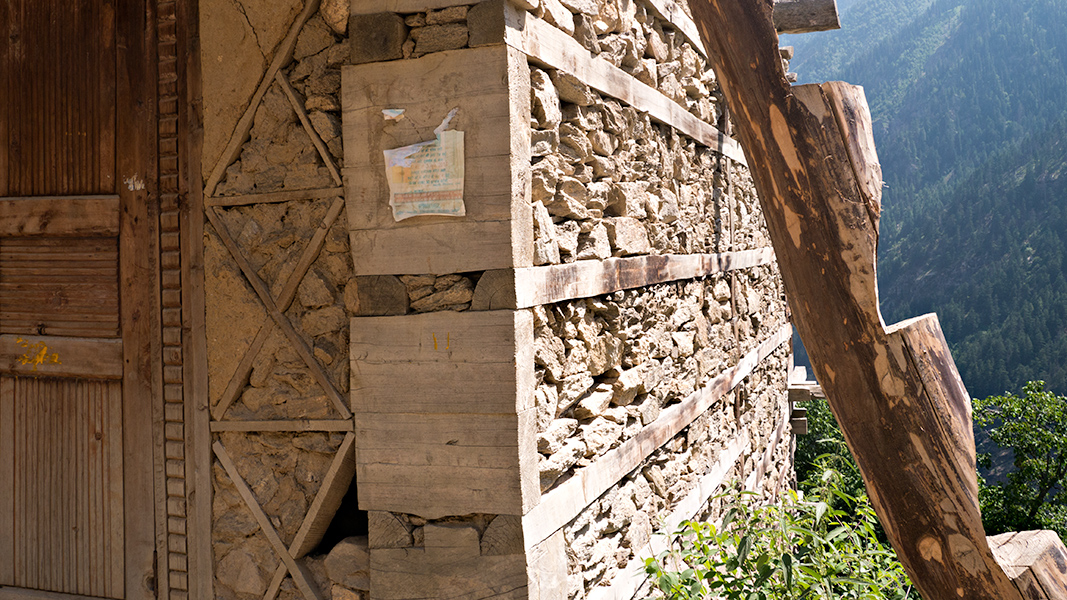 A lot of the people in this part of India are quite fair-skinned: 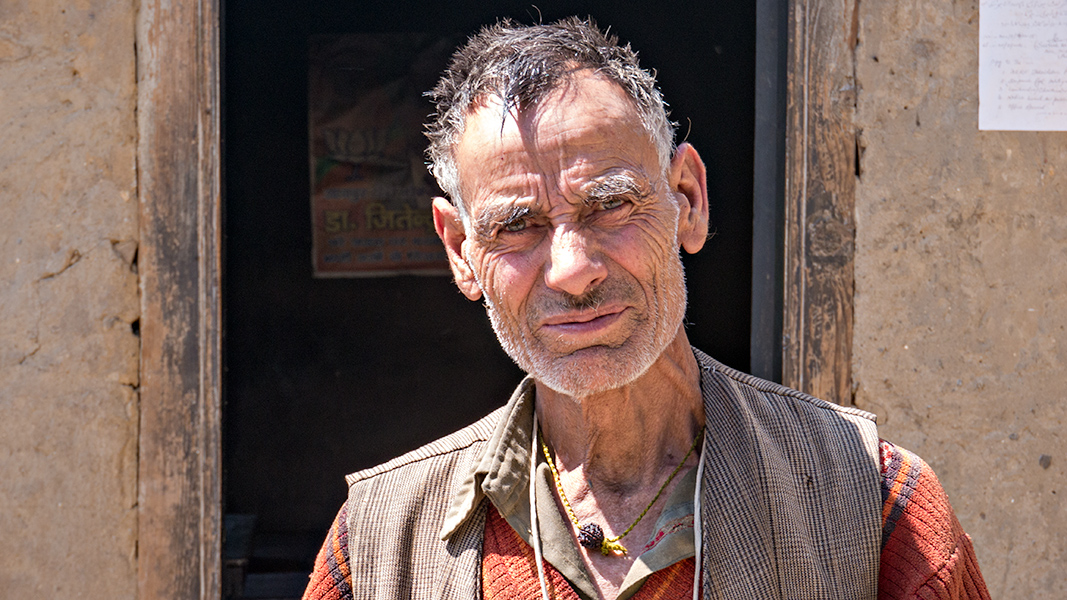 I didn’t expect the road ahead to be too difficult or dangerous. If it’s four-wheel-driveable (and Enfield-rideable), then a mountain bike shouldn’t have too many problems. Even a heavily-laden bike, piloted by an ailing almost-pensioner. 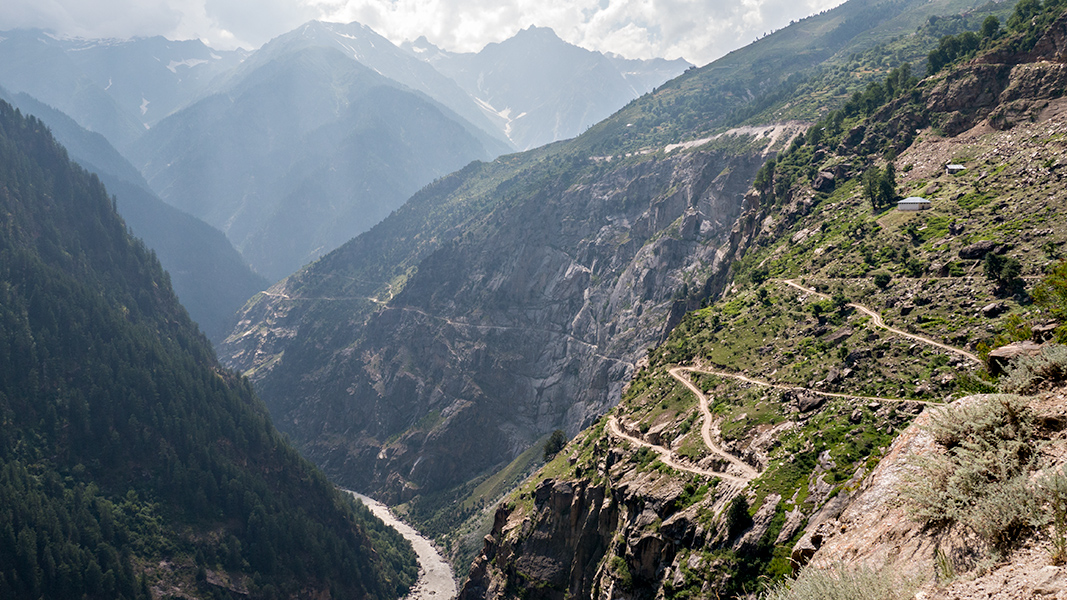 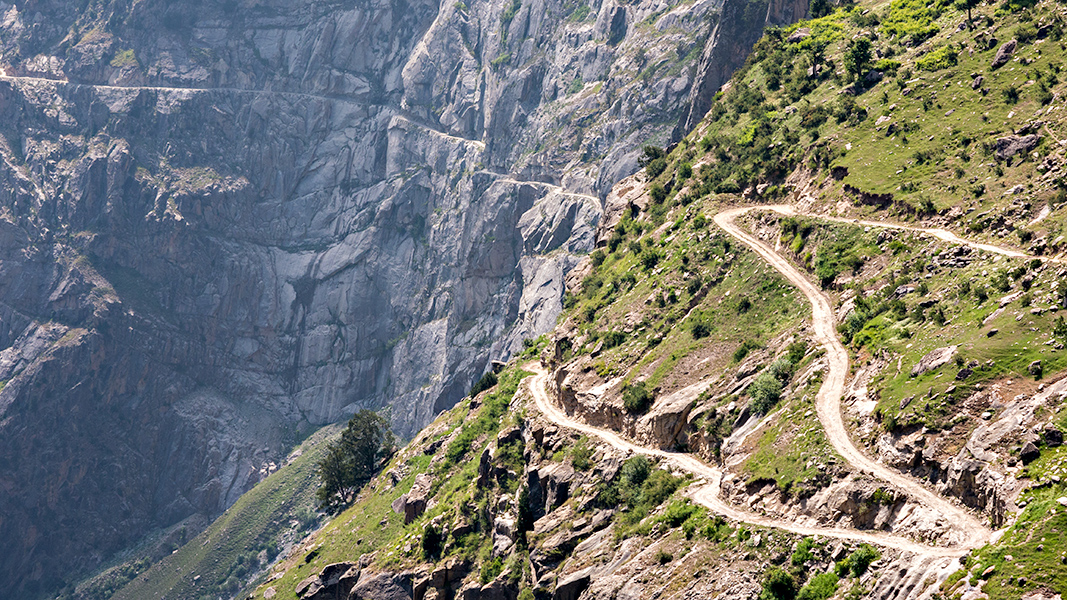 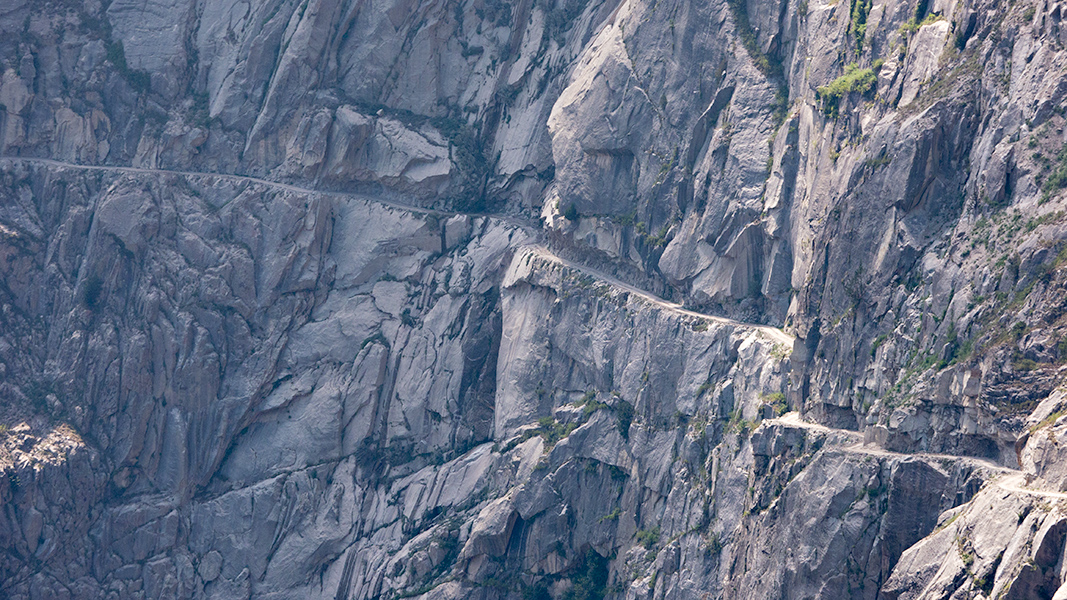 Nonetheless, I was pretty excited. It is a remote and unspoiled part of the world and I felt privileged just to be there. And, of course, I was feeling the surge of adrenalin from a long-held ambition about to be realised.

As anticipated, the road required concentration but wasn’t otherwise demanding at all. It was (just about) all downhill so I kept a firm grip on the brakes. For a number of reasons: I was shooting some (shaky) handlebar video, (https://www.youtube.com/watch?v=LSaPjTh79PU and https://www.youtube.com/watch?v=U0DtPXpfp14) I didn’t want to go too close to the edge, and I didn’t want it to be over too quickly.

Of course, it was over far too quickly – I could have handled much more of this! 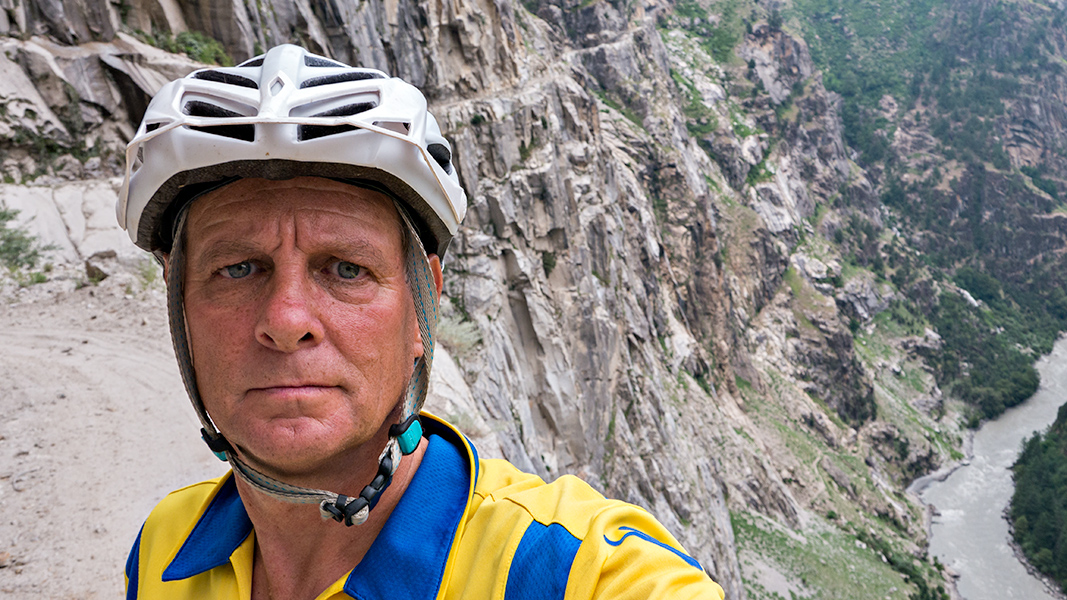 (In case you’re wondering, as I’m sure you are, about the bright yellow and blue top I’m wearing: this part of my ride feels definitely a step back in time, so a Leeds United shirt does seem appropriate.)

Just so I didn’t get too full of myself, a group of girls wandered down on their daily walk home from school: 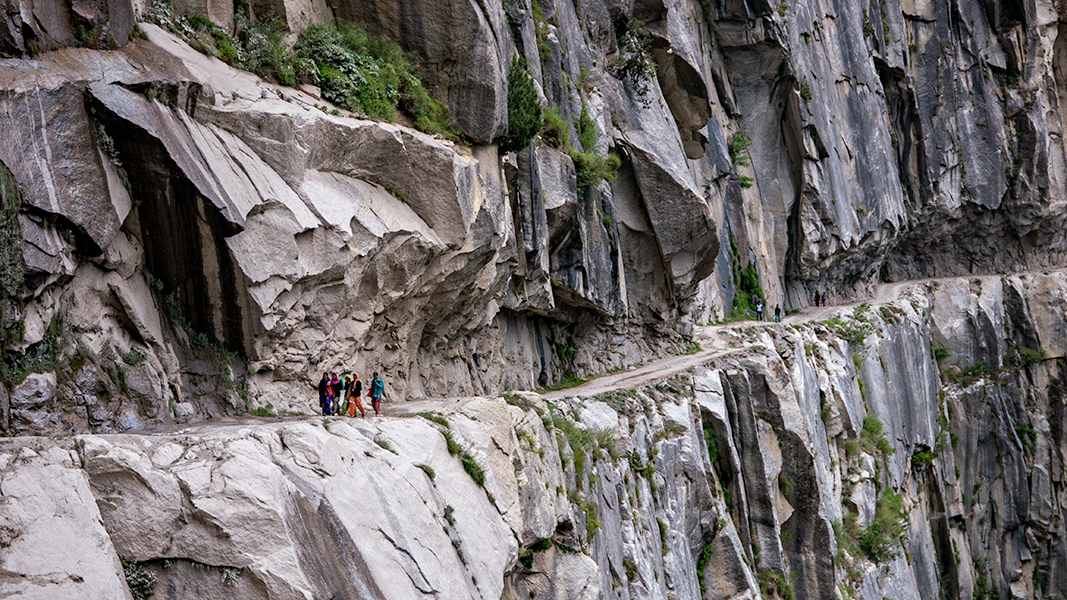 After the most spectacular part was over, the road continued downhill, past a little ‘restaurant’ in the middle of nowhere (presumably, a village was nestled in the trees below).

Anil invited me for tea, while his father, mother and brother looked on, obviously proud of Anil’s learning and communication skills. He is studying civil engineering (in Jammu?) but didn’t look particularly knowledgeable when I mentioned statics, strength of materials or fluid mechanics (civil engineering courses that I teach). He’s in Division 1, whatever that means.

Anil did tell me that the road was good for the next 20 km to Sohal, and that I would find accommodation there. Although welcome news, neither of these pieces of information proved reliable. 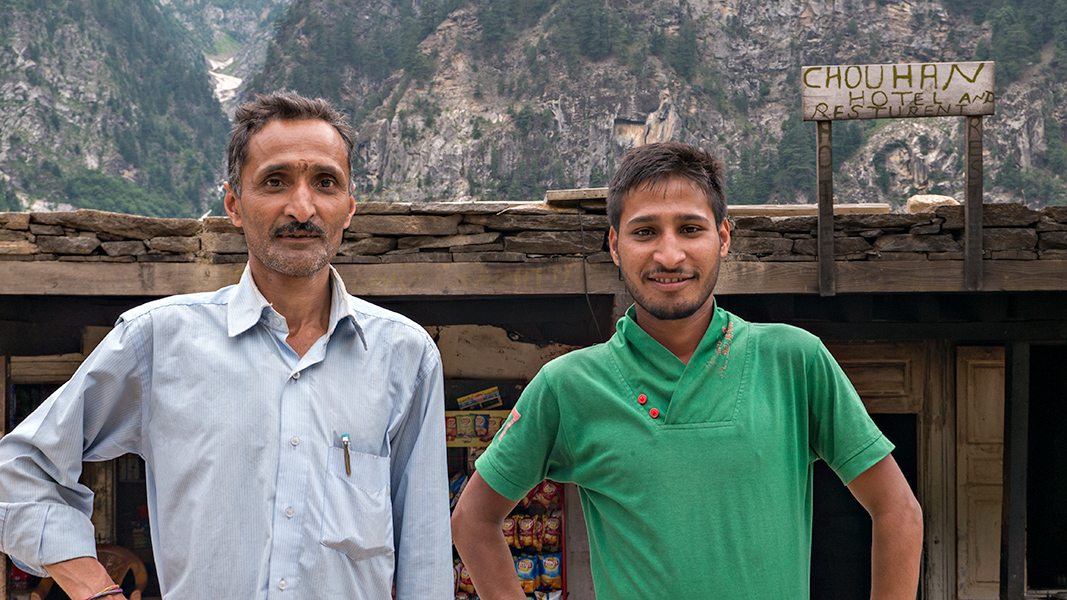 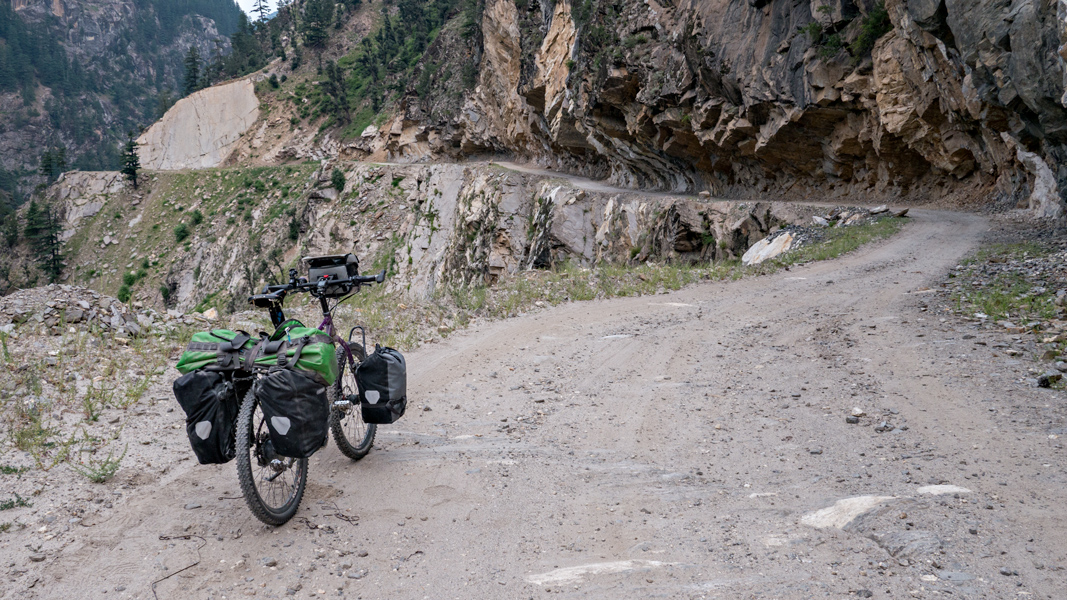 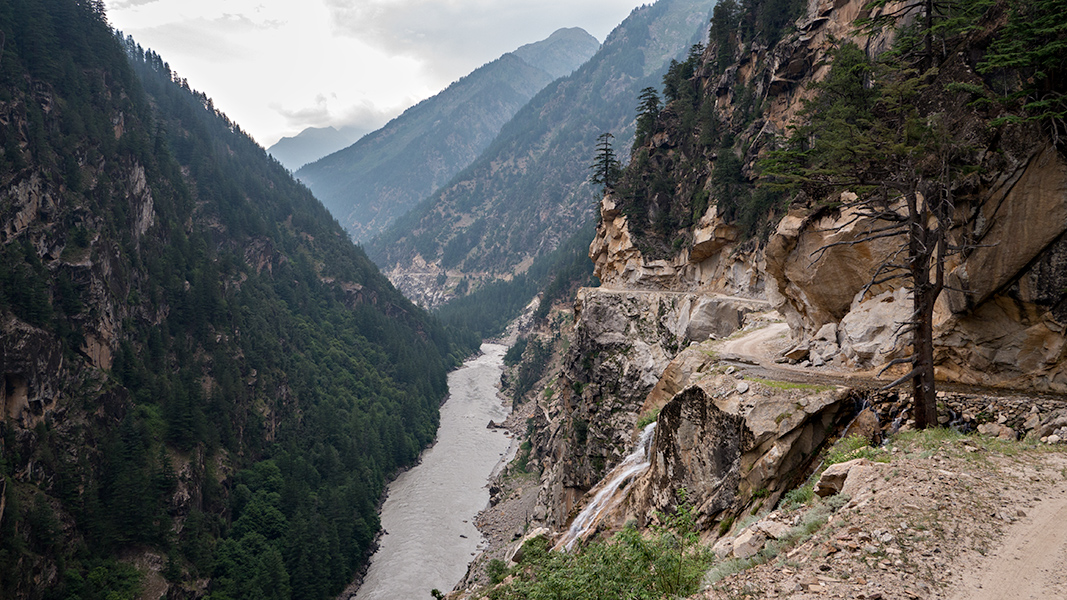 Now they tell me… 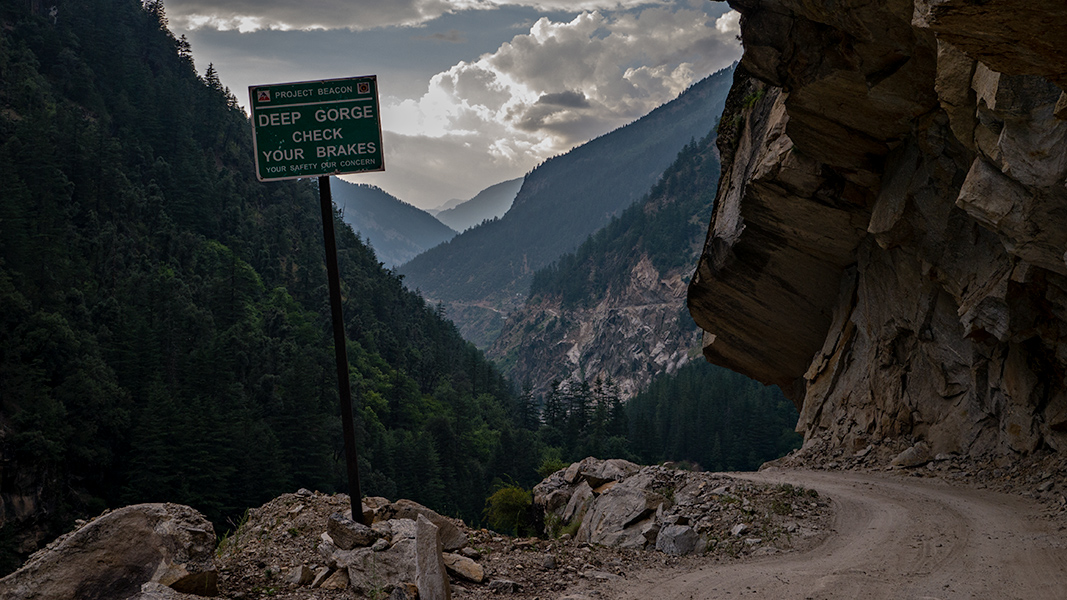 Sohal came and went without the promised accommodation. A group of boys accompanied me out of town, alternately touching the bike and helping push. I pedaled away, though, because I wanted to find somewhere reasonably discreet to sleep.

I found what I thought was a fairly private spot on a flattish platform below the road. There was a steep track down, which I couldn’t manage with the bike; it came crashing down on top of me as my footing slipped in the gravel. My first cycling injury – a long scrape along my left forearm – so I put on a long sleeved shirt for protection rather than mess with Polysporin and bandages in the dark.

Mosquitoes! Despite the breeze. Hopefully, not malarial.

I was getting my gear sorted as the light failed – and three ladies walked by. They had been working in the fields below. Then, as the moonlight became the only illumination, a man followed. No-one seemed too concerned when I indicated that I was going to sleep here.